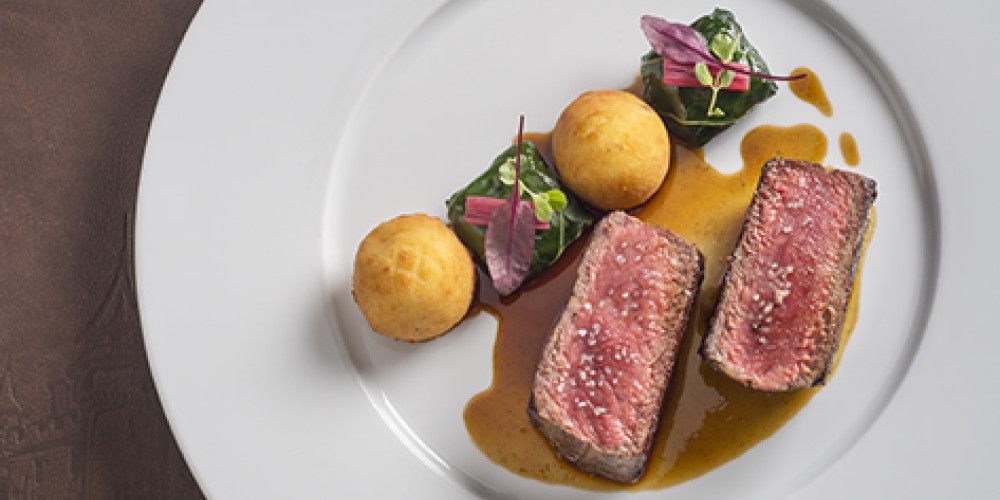 Raise steak to another level with this recipe which celebrates the best of the terroir.

Michelin-starred chef Julien Poisot is the culinary genius behind Château de Mercuès, a 4-star wine-estate hotel in the Lot département.

He has a passion for ‘terroir’, plus the talent for choosing the best produce and creating innovative dishes. “My cooking is instinctive,” he says. “Above all, I transform produce to allow it to express its quintessential nature and enhance it visually in a natural way.”

For the pommes dauphines

For the chou pastry

For the filled chard ‘bonbons’

1Poach the marrow bones in simmering lightly salted water, then take out the marrow and chop in small pieces.

2Plunge the chard leaves into boiling salted water for 2 minutes then into iced water. Drain off then lay them out on kitchen cloth to dry.

3Cut the chard stems into a fine dice and sweat them down in butter without coloring, add the confied shallots, bone marrow, a spoon of mustard and chopped tarragon.

4Do not hesitate to strain if the marrow bone gives off too much fat and set the fat aside.

5Cut the leaves into squares and put a spoon of the filling in. Then fold the edges over the filling to form a square shaped and nicely rounded “bonbon” garnish with a baton of the chard stem and a crispy bread disc.

1Use the beef trimmings to make the jus, you will need about 20cl.

2Put the dry vine stems in a large bowl and set light to them. Put out the burning stems with the beef jus. Pass through a fine sieve and whisk in butter.

For the cooking of the beef

1Season the beef a good quarter of an hour before cooking, to allow the seasoning to penetrate the meat. Start the cooking in duck fat to form a nice crust, add butter and baste the meat regularly until the required cooking point is attained.

For the truffled dauphinoise potatoes

2Make a dry chou paste and add the warm potato puree to it. Then add the butter and egg yolk season well.

3Make 20g balls with the dauphine mix and put the truffle in the center. Close well and mould into a nice round form. Fry for 5 mins at 170°C.