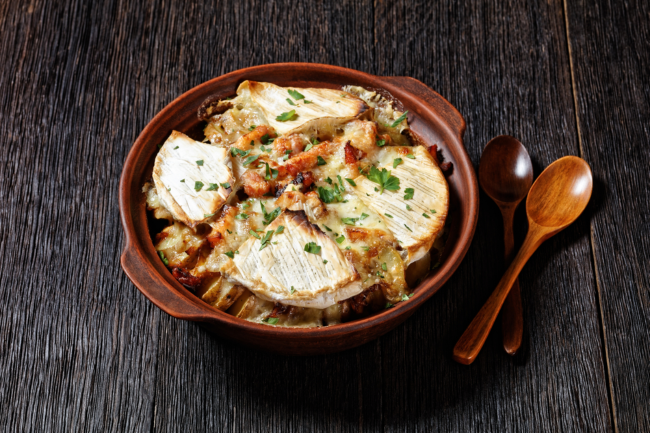 Reblochon, the dreamy, creamy cheese from the Alps, is perhaps best known as a key ingredient of tartiflette, the rib-coating potato and cheese dish beloved of mountain folk and visitors alike.

Made from whole raw milk from Abondance, Tarine and Montbéliarde cows, Reblochon’s origins can be traced back to a small act of rebellion by 13th-century peasants living in the valleys around Thônes (Haute-Savoie). The poor dairy workers had to pay a tax to the local landowners based on the number of pails of milk they produced each day. Fed up of the system, the farmers had a cunning idea: to produce less milk while the inspector was there, leaving milk still in the cows’ udders so they could carry out a second, secret milking after he’d gone. This milk from the second session was very rich in cream – perfect for making cheese. And that is how Reblochon came about, named after the verb reblocher, meaning to pinch a cow’s udder again.

Reblochon has enjoyed AOP status since 1958, and there are two types to look out for. Reblochon fermier is made by dairy farmers twice a day (at least eight hours apart) after milking. It is recognisable by the green seal in its skin and its flavour is stronger and creamier. Reblochon laitier, meanwhile, uses milk from different farms and is made in a factory or cooperative. It can be identified by the red seal in its skin.

At the beginning of the 20th century the production of Reblochon was no more than 40 tonnes per year, but the continued development of the railways alongside a burgeoning tourism industry and an explosion in the popularity of winter sports quickly made Reblochon a household name. Today, 500 farms produce milk to make Reblochon throughout the geographical area of the Reblochon AOP.

And if this has made you add cheese to your to-do list for your next visit to France, how about taking a trip along the Savoie Cheese Route? You can meet the farmers, cheese makers and refiners from 76 sites across the departments of Savoie and Haute-Savoie who are keen to welcome visitors and share with them their undoubtable skills. Remember to leave room in the boot for all that cheese!

Can you guess how many cheese varieties there are in the world? Answer in the comment section below!

(The answer will be available in our next week’s newsletter. Click on the link below to sign up.)