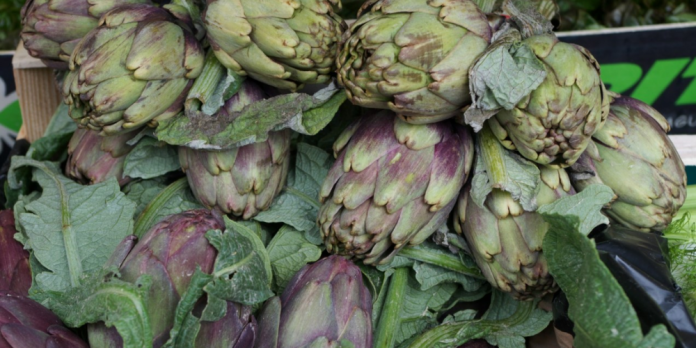 Forget the tasteless, soggy hearts in cans and the antipasti swimming in tubs of olive oil at the supermarket – there can be nothing more exotic in the vegetable world than the artichoke.

This king of vegetables is an adventure on a plate. Just boil it whole until the petals start to pull away easily and then serve with a homemade vinaigrette. Dip the plump, fleshy bases of the petals into the sauce and then pull out (and discard) the fuzzy choke to reveal the heart.

At the market in France, look out for le Camus Breton, easily spotted because of its matt, grey-green leaves and overall bell shape, a variety which is best served steamed. Meanwhile, Le Violet de Provence, meanwhile, is conical in shape and covered in small leaves tinged with green and purple. It is excellent raw, with a hint of vinaigrette, and just melts in the mouth. Other varieties to watch out for include Salambo, Violet de Gapeau, Castel, Calico, Blanc Hyérois and Macau.

To make sure you pick up an artichoke in peak condition, make sure that its petals are tightly packed together (a sign it is not over-ripe) and not spotted with black. Raw, it can be kept in the crisper of the fridge for several days but once cooked you’ll need to eat it in 24 hours because it will oxidise, which ruins the taste.

Want to make sure you take home the king of artichokes? The famous artichaut du Roussillon has obtained PGI status, in recognition of its terroir and the savoir-faire of its producers.

Did you know? Artichokes are mainly grown in the north in Brittany but they are also farmed all the way down near the Spanish border in Occitanie.