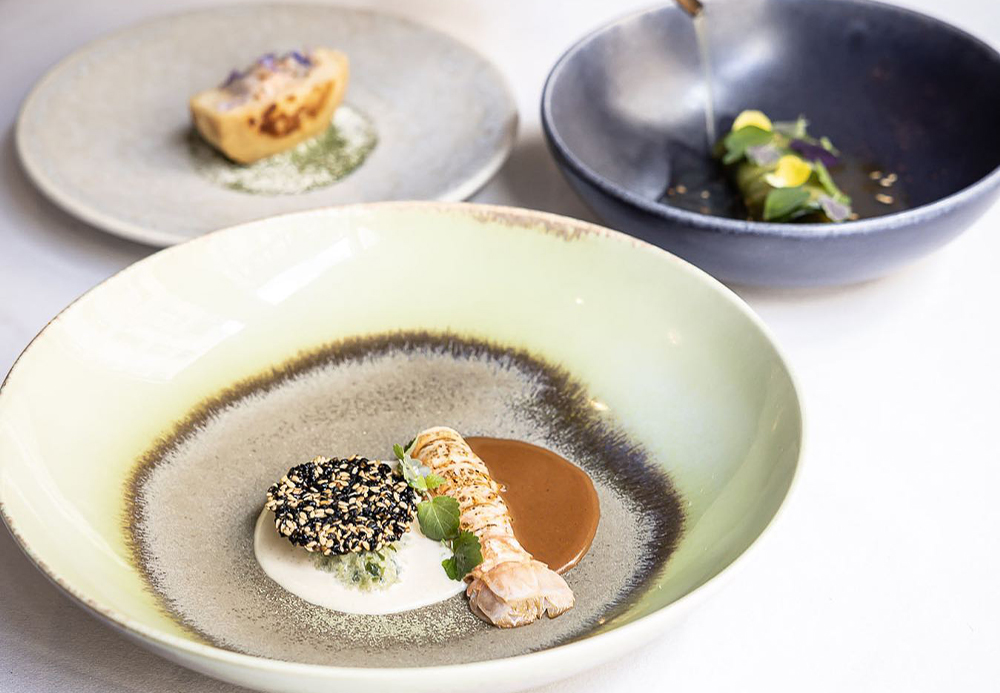 We all know it’s going to be a tough winter with the cost-of-living crisis starting to pinch as the temperatures drop. But after two years of lockdowns thanks to the pandemic, we’re all keen to revisit our favourite destinations in France and treat ourselves to some of the best cuisine in the world. So, to let you indulge your palate while being kind to your wallet, here are seven of the most affordable Michelin-starred restaurants in Paris right now…

Michelin says: “This place close to the Bourse, run by a Japanese pastry chef, combines classic recipes and more flamboyant creations (such as diplomate flan with cardamom, poached peaches and fennel sorbet), subtly enhanced and rich in smoked and grilled flavours. Balance and precision are the watchwords, illustrated by the sommelier’s advice. Very friendly, slick service.”

Michelin says: “Thirty-something Jason Gouzy, who hails from Rennes, is the epitome of generosity, like Rabelais’ well-known character and the restaurant’s namesake, but he is also subtle. He trained at the Ferrandi School before honing his skills at l’Assiette champenoise, the Bristol and the Baudelaire (Burgundy Hotel). Now alone at the helm, he worked with a fashion designer to create this understated gourmet cocoon, both bourgeois and romantic, in the heart of the lively Sentier district. The theatrically glazed kitchen shines the spotlight on his culinary talent from plays on textures to surf and turf recipes without forgetting smoked ingredients and spices, illustrated by smoked beetroot and sardines or the medley of blue lobster.”

Michelin says: “Was Nicolas Flamel also an alchemist, as well as a rich bourgeois and former owner of the oldest house in Paris (1407)? Historians may disagree, but we have no doubt about chef Grégory Garimbay. This chef with a star-studded CV (Sylvestre Wahid, Alain Ducasse at the Plaza Athénée) transforms his ingredients into culinary gold. Jelly of courgettes and blackberries; field-grown tomatoes, smoked ricotta and sorbet of green zebra tomatoes; blue lobster from Brittany, green peas, shellfish jus: the new master chef of this distinguished establishment signs balanced, modern recipes, whose aromas and flavours are intelligently assembled, resulting in no-frills, down-to-earth, occasionally original dishes, like his chocolate and girolle mushroom tart. Ah! a culinary alchemist indeed!”

Michelin says: “Intimate atmosphere, mirrors, white walls and pretty armchairs… Auguste is perfectly tailored to the cuisine of Gaël Orieux, a chef who is passionate about food and ingredients. His dishes? A quest for harmony and inventiveness, finely weaving together ingredients from land and sea. Affordable prices at lunch; they pull out all the stops at dinner.”

Michelin says: “A few steps from Aligre Market, the stylish dark blue façade hides a vintage interior dotted with Art Deco details. It is now the haunt of a talented couple, Frédéric Lorimier in the kitchen and Camille Gouyer in the dining room, who met at the Vague d’Or – Cheval Blanc in Saint Tropez. Inspired by this background of excellence, the chef meticulously crafts dishes using seasonal produce (we tasted scallops paired with parsnips), thanks to flawless technique and exquisitely aromatic sauces (such as the beurre blanc sauce with a twist of grapefruit). Camille echoes the same professional and cheerful approach in the dining room.”

Michelin says: “Why the name? This restaurant brings together one chef from Brittany, Erwan Ledru, and one from Perpignan, Kevin de Porre, who are childhood buddies; secondly, the premises combine a stylish vintage vibe set off by contemporary details; and finally, a reference to one of the greatest Selosse champagne vintages. The concise menu (flanked by a lunchtime menu and a tasting menu) unveils up-to-date, meticulous, flavoursome cuisine which calls upon top-drawer seasonal ingredients. The surf and turf combinations are particularly appetising (Brittany lobster and sarrazin wheat; monkfish, shellfish and Spanish chorizo or Spanish pork and Cancale oysters).”

Michelin says: “Japanese chef, Nobuyuki Akishige, who boasts a 5-star CV with spells at the Atelier du peintre in Colmar, the Vague d’Or in St Tropez with Arnaud Donckele, the K2 in Courchevel and the Pyramide in Vienne, signs seasonal, subtle and disciplined dishes with proper Gallic overtones using top-quality goods. A characteristic bistro interior provides the perfect foil to a legible repertory whose harmony of flavours results from spot on cooking, illustrated by roast duck breast and purée of parsley roots and kalamata olives. Unbeatable value for money. If only there were more neighbourhood hangouts like this!”

Looking for more inspiration for your travel to Paris? Visit our sister site, bonjourparis.com for your insider’s guide to the city of light.