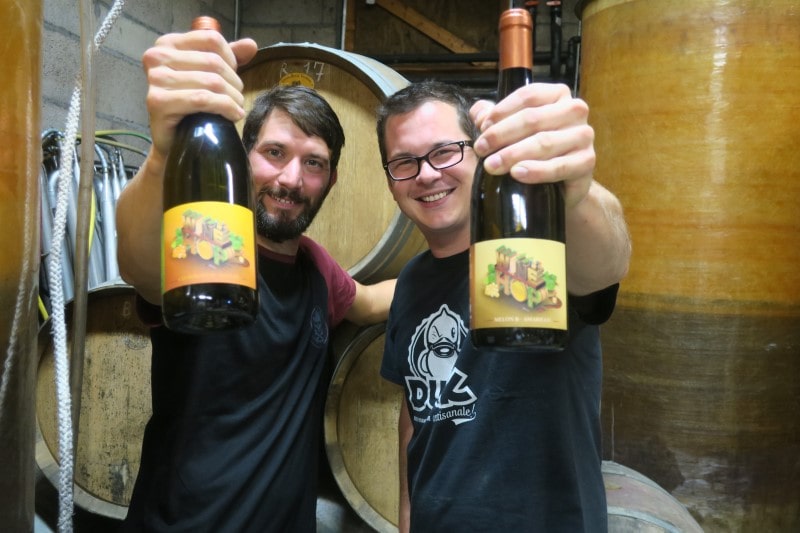 In the Pays Nantais, in the Loire Valley, two friends, a brewer and a winemaker have succeeded in creating and marketing a wine which tastes like a beer

Do you enjoy a nice beer? Do you like good wine? Well, thanks to Maxime Bordelot, a brewer, and winemaker Romain Héraud, it is (nearly) possible to savour both simultaneously, for the childhood friends have succeeded in uniting the two beverages in creating a line of hopped wines called Wine Hop. It includes five white wines, made from the Chardonnay grape or Melon de Bourgogne (the grape used to make Muscadet), in which different varieties of hops such as Mosaïc, Amarillo, Citra or Simcoe are infused. With one exception, these wines are not sparkling, but they have the lively taste of beer without the bitterness, and pair perfectly with seafood, poultry and spicy dishes.

“Today, we are the only ones doing this and I am always surprised that no one has ever thought about it before us,” says Maxime, 31.

Wine Hop was born almost by accident. In 2009, Maxime, who worked for a local brewery, started making beer during his free time with Romain, son of a winemaker from Clisson, near Nantes, whose estate, Château Le Vallon des Perrières, produces Muscadet Sèvre-et-Maine.

“We were making beer in the cellars of the estate with hops and yeast that I took from the brewery,” says Maxime. “We did it for a few years. Then one day in November 2016, I realised I had brought too many hops. For fun, I put it in the wine to see what it would be like. We used wine made from Folle Blanche, the grape used to make Gros Plant, another wine from the Nantes region. We thought that the wine’s acidity could be balanced by the hops and it could be pleasant to drink. In fact, it was not good at all! So, we forgot all that. Then, exactly one year later, during a party, we found the bottles and opened them. To our surprise, the wine had improved considerably and the bitterness had subsided. So Romain and I said to ourselves, ‘We’re going to try again’.”

For two years we experimented,” says Romain, 32: “We looked for the right varieties of hops and wine using the technique of ‘dry hopping’, which consists of letting the wine ferment in a vat, then adding the hops, and letting it infuse for a few days. Finally, we achieved a satisfying result and we started to have local wine merchants taste it. They thought it was amazing.

”As a souvenir of their unusual venture, they named their product Wine Hop. Maxime explains: “For us, it sounded like ‘Why not?’ (an English expression trendy in France), as in ‘Why not try a bold and successful combination of flavours, like the mixture of wine and beer?’.” Their gamble paid off: this year, despite the coronavirus pandemic, they sold 10,000 bottles of Wine Hop, made with wines from Vallon des Perrières. “At the estate, I have enough wine to make 30,000 bottles “, says Romain. “If I don’t have enough wine, we will work with neighbours or create a company to help the winegrowers.

”Wine Hop wines have 12% alcohol content and cost around €10 a bottle. For now, they are distributed through local dealers or franchises. Maxime and Romain hope to be able to export them soon, especially to the United Kingdom and Canada. Keep your eyes peeled!