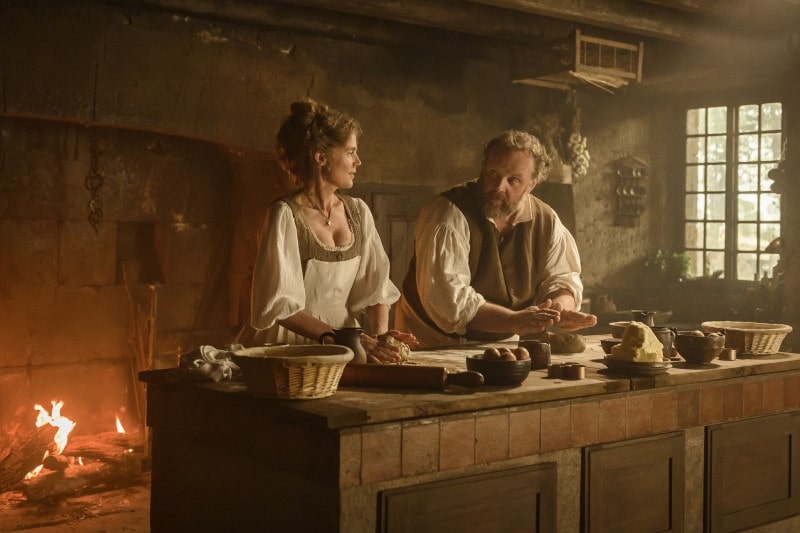 We love a good foodie movie here at Taste of France and we can’t wait until the autumn when director Éric Besnard’s sumptuous tale of France’s first ever restaurant is due for release.

Set at the dawn of the French Revolution, it follows the fortunes of Pierre Manceron (Grégory Gadebois), a daring but proud cook who is sacked by his master the Duke of Chamfort (Benjamin Lavernhe). With a bit of encouragement from his new apprentice (Isabelle Carré) Manceron leaves behind the shackles of servitude and undertakes his own revolution. Together, they invent a place of pleasure and sharing open to all: the first restaurant.

Anne-Robert-Jacques Turgot, Louis XVI’s comptroller general of finance, abolished various trade restrictions in a bid to save France from the economic crisis it was enduring at the time. This meant that from 1776 onwards, merchants, who until this point had been restricted to trading in just one product, could now sell several at the same time. Meanwhile, the nobles, sensing the coming Revolution, headed abroad, leaving their cooks unemployed. Add in the growing sense of equality as championed by the Revolution, and caterers start to pop up, eventually leading to the idea of food served at a table, with a menu in a… restaurant.

The first ‘real’ restaurant is considered to be La Grande Taverne de Londres in Paris, which was founded by Antoine Beauvilliers in the 1780s. According to gastronome Jean Anthelme Brillat-Savarin, the author of Physiologie du Goût, it was “the first to combine the four essentials of an elegant room, smart waiters, a choice cellar, and superior cooking”.

In the movie, the first meal served by Manceron to the duke and his guests is a thoroughly OTT sumptuous feast comprising 40 dishes.

“The nobles of the time were bored,” explains the film’s director, Éric Besnard. “They have not held a political office since the end of the reign of Louis XIII and the beginning of Louis XIV’s. Nor do they have a military role — there is no war. All they have left with is repartee, debauchery and gastronomy.

“The cook has become an ornament, a token of wealth and pomp. These nobles have no real culture, they are not interested in ideas of progress and do not see that history is on the march.”

As part of this feast, one of Manceron’s offerings is the ‘Délicieux’, a potato and truffle dish which provokes outrage at the dinner table.

“In the 18th century, the cook was someone who was asked to reproduce dishes; certainly not to invent any. He is not supposed to show initiative,” says Besnard. “Manceron therefore disobeyed by proposing one of his creations, but he committed a more serious crime: that of having cooked products growing underground, the Church considering that everything that came from it was not only not edible but also proved to be carrier of diseases such as leprosy. Potatoes and truffles were considered devil’s products. At that time, the nobility and the clergy still believed in a celestial scale of food. The more airy they are, the more divine they are; a pigeon is perfect, a cow, closer to the ground, is less so… The potato, however very nourishing, will take a hundred years to establish itself in France.”

Well, that’s certainly whet our appetite – keep your eyes peeled for this visually stunning, warmly comedic romp through history in the autumn.