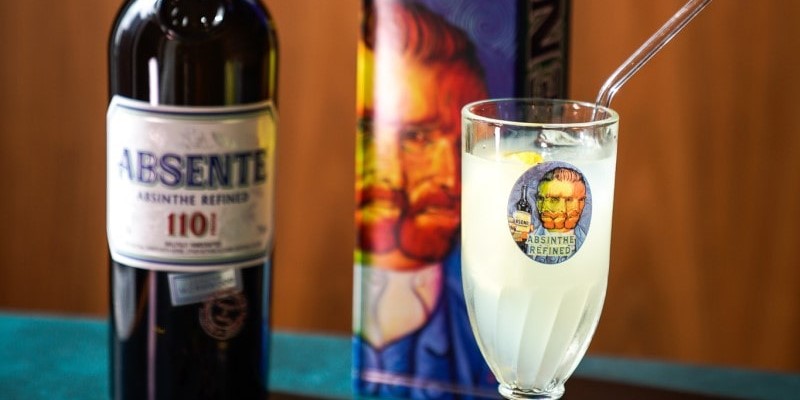 Absinthe has been re-emerging in the US, going from simply being known as the beloved drink of Impressionist painters and poets in the 19th century, to be tasted and appreciated by an always growing group of aficionados.

Absente Absinthe Refined, crafted in the southeastern France by a century’s old distillery, follows one of the oldest recipes dating back to the old days.

In 1999, this recipe was chosen among 200 others and Absente became the first absinthe containing thujone available in America since its ban in 1912.

Wormwood grows naturally in the Alps mountains, from Switzerland to Jura, Savoy, Piedmont, and Upper-Provence; and is known since antiquity for its digestive and antiseptic properties. In the mid19th century, though, consumers started to use it for its supposed hallucinogenic effects, caused by the thujone (a narcotic molecule naturally present in the herb). Today Thujone level is limited to 10mg per liter.

Herbs are harvested in spring or early summer, then dried, then macerated into alcohol. Wormwood and 7 other botanicals (mugwort, anise, peppermint, and lemon balm, just to name a few) are distilled through a copper still pot. The final distillate is then macerated with a 9th ingredient, Roman Wormwood, which gives absinthe its green color. The result is a very aromatic and intense taste. The product offers a dominance of herbs and a spicy/bitter finish.

Absente is 110 proof, which gives consumers a full experience without sacrificing the taste. It can be used in many cocktails. The most famous is the legendary Sazerac, born in New-Orleans in the late 1700’. But Absente can also spice up more common recipes, where it adds an herbaceous tone. Hence Absinthe Spritz or Absinthe Tonic.

The most intriguing way, though, is the Ritual, also known as the Green Fairy.  Pour 2oz of absinthe in a glass, place an absinthe spoon with a sugar cube on top of the glass, pour 2 oz of water over that sugar, stir it using the absinthe spoon and drink. The addition of water is very important as it allows the spirit to “blossom,” bringing out many of the flavors. Visually, the water poured over absinthe turns it cloudy and vaguely opalescent, an effect referred as louche.

The Green Fairy ritual is the way absinthe was enjoyed in the 19th century when it was the signature drink of the greatest artists. Poets and painters were then using absinthe to feed their imagination and creativity. Vincent Van Gogh was certainly one of the biggest absinthe afficionado of that golden age. And his work, as much as his personality, are closely associated to absinthe.

Absente comes in an artistic gift box paying homage to Vincent Van Gogh, with the spoon needed for the ritual.