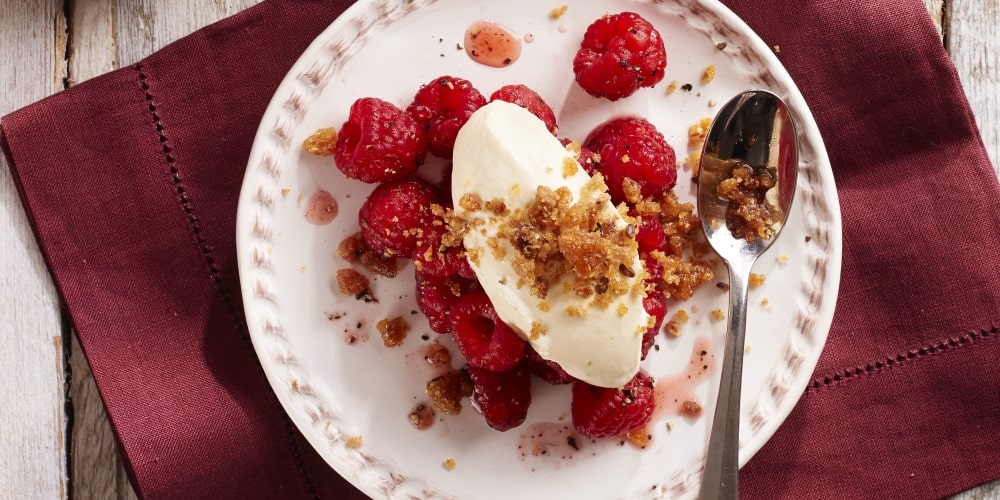 1Put one slice of the Scandalous Seeds bread into a small food processor and whizz until semi fine crumbs are formed.

2Pour the crumbs into a frying pan, adding 20g butter over a low heat.

3Stir the crumbs around until dry and crisp but not burnt (five to eight minutes).

4While cooking the crumbs, in a small non-stick frying pan heat 4 tbsp of caster sugar with just enough water to wet it.

5When the sugar starts to turn a caramel colour swirl it so that the caramelisation is even.

6When you’ve achieved a hazelnut brown, stir the crumbs into the caramel to cover them before tipping onto some grease proof paper.

7When crisp blitz again to break up any nuggets.

8In a bowl, add a big grind of black pepper into the raspberries and mix.

9Finely grate the lime zest into the loose cream, beating until holding its own but not split and fold in the juice of half a lime.

10Squeeze two halves of the lime into the raspberries adding one and a half tablespoons of runny honey.

12Spoon the fruit over two or three plates.

13Make a large quenelle (or spoon a dollop of the citrus cream) and place onto the raspberries and then cover with a good scattering of the crumbs.

By Valentine Warner, in partnership with Allinson’s