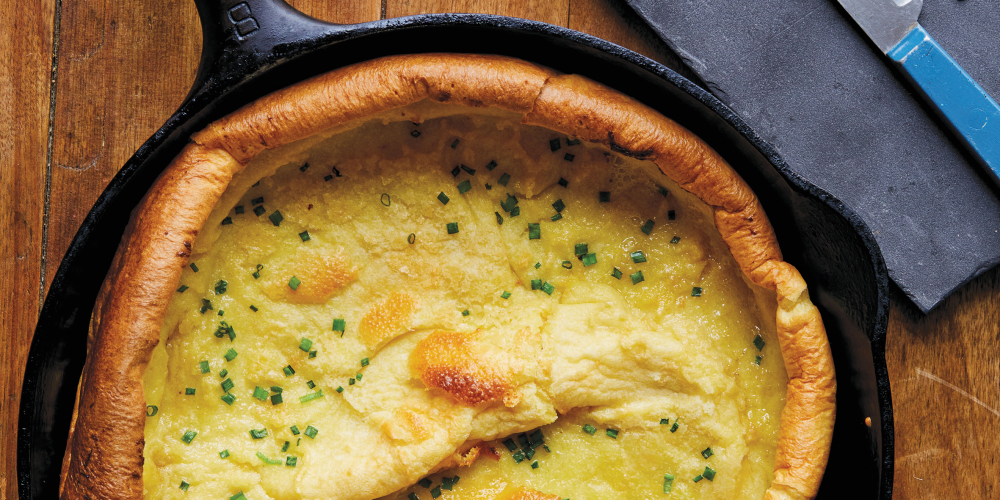 Pascade is a thick savoury crêpe from Aveyron, in the centre of France, traditionally made at Easter (Pâques in French), which is what the name derives from. The recipe was originally meant to use up the eggs that had piled up, uneaten, during Lent. If ever a dish was more than the sum of its parts, this is it. The simple batter cooks up to an astonishing texture, halfway between a crêpe and a soufflé, crisp on the outside and comfortingly tender inside. Think of it as the French cousin to the Dutch baby pancake.

Pascade is the focus of the eponymous Parisian restaurant created by Michelin-starred chef Alexandre Bourdas. He uses the dish to compose edible tableaux of seasonal ingredients: lightly dressed greens, shavings of cheese, and pickled onions on top; thin slices of radishes and turnips with a herb coulis; mâche leaves with sticks of green apple and thinly sliced prosciutto. Pascade is a natural fit for brunch, but I like it even better in early evening, served with sparkling white wine. I cut the pascade into thin wedges, shower with snipped chives, and serve in the pan for guests to grab and eat.

2In a medium bowl, whisk together the eggs, flour and salt. Whisk the milk in slowly, until the batter is smooth. (Alternatively, combine all the ingredients in a blender and blend on medium-high for a few seconds.)

3Put the butter in a 10-inch (25cm) ovenproof cast-iron pan and put in the oven until just melted, watching carefully so it doesn’t burn. As soon as the butter is melted, remove the pan and swirl to spread the butter. Pour the batter in gently, then return to the oven and bake until puffy and golden brown, 20-25 minutes. (It will collapse when it comes out.)

You can fold finely chopped herbs and/or grated cheese into the batter if you like.

Want more mouth-watering recipes? Order this wonderful book by clicking the link below!﻿