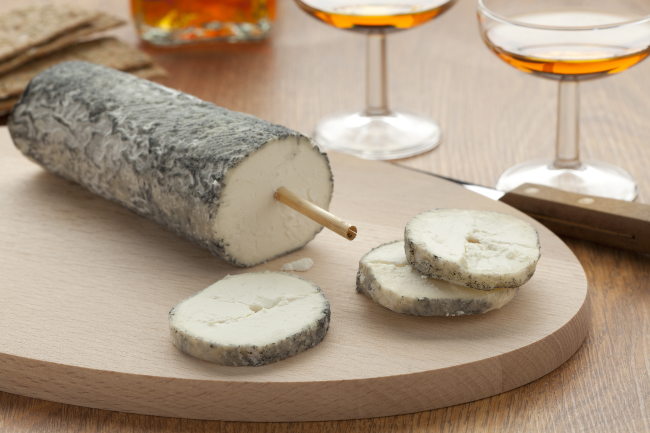 If goat’s cheese is your go-to when the cheeseboard is passed round, then you may want to add Centre-Val de Loire to your list of must-visit destinations in France.

With 650 farms boasting five AOP (Appellation d’Origine Protégée) varieties between them, it is the place to go to for traditionally made artisanal cheese. Some 90,000 goats (Alpine, Saanen and Poitou breeds) produce the milk for the cheese, 40% of which is made on the farm.

First made in the 19th century, Selles-sur-Cher (named after the village of the same name) is easy to spot thanks to its grey rind, which was traditionally made from ash but today is made from vegetable charcoal. Richly earthy and salty.

According to legend, the pyramidal shape of this cheese is a result of the inhabitants of Pouligny-Saint-Pierre trying to copy the shape of the village church’s bell tower – but don’t let that put you off. It can taste dramatically different depending on its affinage (ripening): ripening ‘in white’ (covered in Geotrichum candidum) gives it the sweet tang of dried fruits, while ripening ‘in blue’ (covered in Penicillium album) leads to a deeper, goatier flavour with hints of hazelnut.

This log-shaped beauty, which is moulded by hand and rolled in wood ash, is instantly recognisable thanks to the straw that runs through the centre, designed originally for ease of handling. These days, it also carries the name of the appellation and the identification number of the individual producer. Mild and creamy, it pairs beautifully with one of the region’s white wines.

Possibly one of the best-known goat’s cheeses in all of France, Crottin de Chavignol is made by around 100 producers tucked between the Cher, Nièvre and Loiret rivers. Matured for at least ten days, the older it gets, the more its rind develops from white to blue. Tangy, creamy and goatily earthy, enjoy with a crisp white wine.

Another one with a characterful shape, this almost-pyramidal cheese apparently has Napoleon to thank for its missing tip. So annoyed was the temperamental Emperor at his defeat in Egypt, he apparently lopped the top of his Valençay with his sword. Nutty, fruity and creamy, enjoy with a glass of Valençay wine.