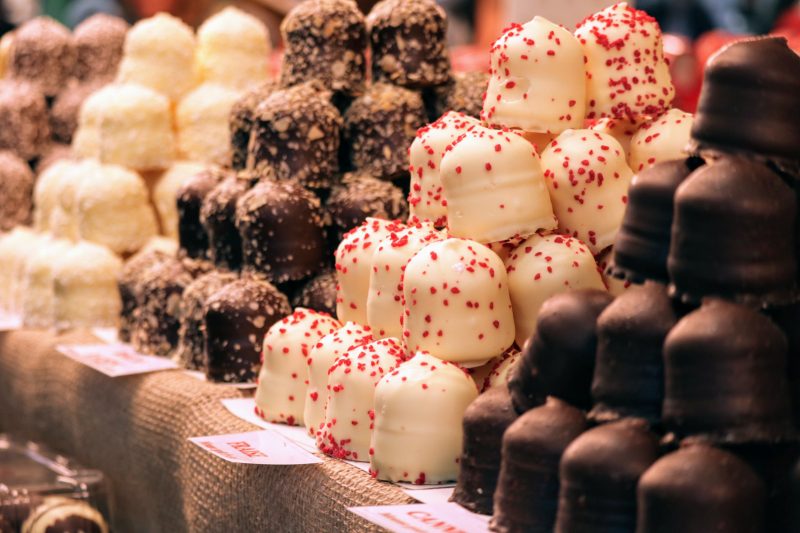 “En Octobre, on parle chocolat,” declared French pâtisserie giant Pierre Hermé, who was among the first to exhibit at the Salon du Chocolat, the brainchild of Sylvie Douce and François Jeantet, when it first opened its doors in 1995.

Philippe Conticini was behind the development of a new pastry area which hosted daily live demos and tastings, as well as the annual International French Pâtisserie Trophy, which this year was awarded to Dorian Zonca, a professor in pastry at Paris’s Bellouet Conseil, who has worked with the likes of Ladurée and Pierre Hermé.

There really was something for everyone at this year’s Salon. Espace Japon held classes such as the pairing of sake and chocolate, and offered samples of a yuzu-flavoured variety that was out of this world; a space named Elles showcased both up-and-coming and established women in the cocoa and chocolate business; and Salon Junior offered entertainment and classes for the little ones.

I certainly didn’t need breakfast before visiting, thanks to the bountiful samples on offer, ranging from chocolate morsels to breakfast spreads to chocolate-flavoured sparkling wine. My favourites were a tea- and sweet pea-flavoured Japanese chocolate from Matcha Craft Chocolate and the raspberry-cranberry nougat from Sweet Alpes.

But the highlight had to be the live demonstration of the art of wagashi by Junichi Mitsubori. Wagashi is a delicate Japanese confectionery made of bean paste which is traditionally served with tea. Every piece is a work of art, intricately sculpted and decorated with subtle colours.

While artistes reign supreme over this magnificent event, it’s not just about the clever folk who make divine pastries, darling little confections and even clothes out of chocolate.

The Salon is also keen to promote and support the people without whom, none of this would be possible: the cacao producers themselves.

On my second day, I returned to check out the various stands representing cacao-producing countries, adorned with bright and colourful displays, live music and dancing. Singers and dancers from Brazil and Tahiti drew large crowds while those looking for a more chilled-out experience could enjoy the soothing Polynesian music and hula dancing.

From there, I made my way towards the gallery hosting the Bûches de Noël, created by some of the most talented pastry chefs in Paris. My favourite was the cake presented by Chef Patrick Pailler, of Café Pouchkine, a light and airy creation that combined a crunchy praline spéculoos, caramel, vanilla crème brûlée, and jasmine tea mousse.

On Saturday morning, the pastry space really came into its own and I spent three happy hours watching Angelo Musa, Philippe Conticini, and Nina Métayer take the stage one after the other. They each created one of their signature desserts live, interacted with the public, and followed up with book signing in the Librairie Gourmande.

But the headline event had to be the now-legendary chocolate fashion show, with the crowds hustling and bustling in anticipation long before its 5pm start. And boy, was it worth it! What followed was an incredible 30-minute extravaganza of haute couture, chocolate craftsmanship, and excellent performances from the beautiful dancers. Some of the dresses were also on display before the show, available for a closer look.

Even after spending two full days at the Salon du Chocolat, I have the feeling that there was more to discover. I don’t know about you, but I’m already marking it in my calendar for next year.

Cocoa is the name for the powder made from roasted and ground cacao seeds.

Cacao is the name for the tree, an evergreen, from which various cocoa products – including chocolate – are made. The tree’s seeds are contained in large, oval pods which grow on the trunk. Gotta be the best tree in the world, right?!