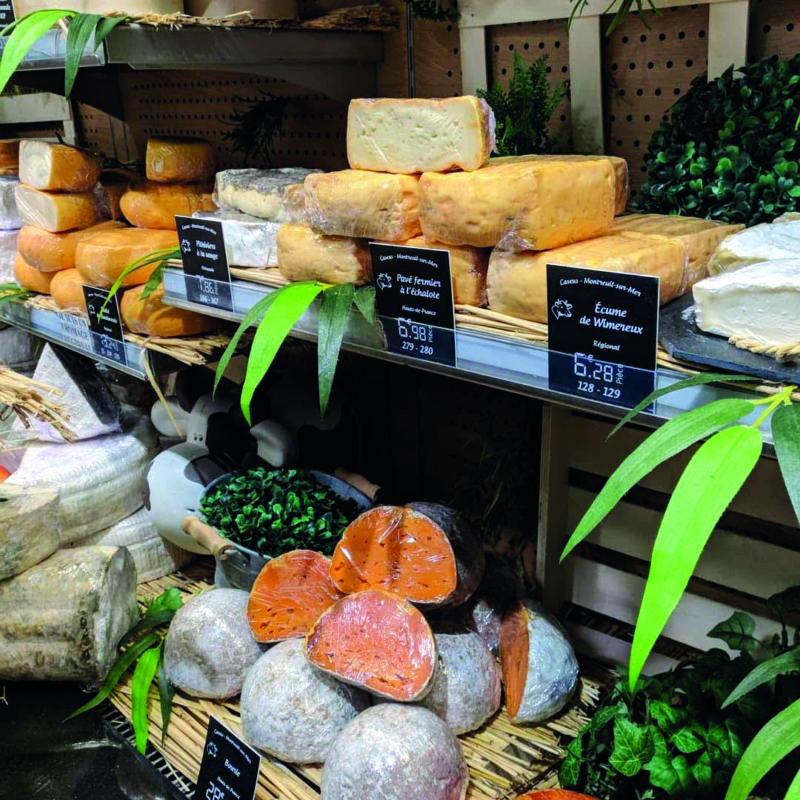 “This is an institution,” raves Martine Ligier, pointing right, left and centre at virtually every butcher, baker and candlestick-maker in Montreuil-sur-Mer’s market square. Sensing my growing dismay – “institutions” as far the eye can see, my foot, the cynic in me pipes up – the tourist rep reins in the enthusiasm.

Following our noses to the Fromagerie Caseus across the street, she lets an involuntary, “It’s an insti…” slip, catching herself mid-word, the “tution” petering out into a choked whisper. Pushing through the sinuous queue, past stacks of the region’s prize stinkers – top of the crop the Boulette d’Avesnes, a devilish but oh-so moreish cone-shaped chunk of Maroilles sprinkled with fiery paprika for that extra throat-scratching oomph – I swallow my words.

By the counter, owner and one-woman assembly line Ludivine Lefrançois is snatching wheel after wheel from the groaning shelves, doling out gooey morsels to peckish customers at record speed. “It really is an institution,” Martine says with renewed confidence, vindicated by the uninterrupted flow of customers. “We’re really a gastronomic destination. It’s no empty brag.”

The statistics speak for themselves. With 29 restaurants, hotels (chief among them the iconic Château de Montreuil, helmed by Roux alumnus Christian Germain), delicatessens and wine bars dotted across town – one eatery per 79 inhabitants! – Montreuil-sur-Mer has earned its crown as the Côte d’Opale’s premier foodie destination fair and square.

Despite the word’s old-fangled connotation, “institution” doesn’t equal “outdated” or frozen in time – not in this northern nook anyway. There is nothing faded about the cheesemonger’s slick backlit counters, nor the nearby La Cave de Montreuil’s bang-on-trend premises and shiny new tasting area. So new, in fact, (it’s barely been open a week) it still has that freshly-laid parquet smell.

Their vin mystère experience, which invites amateurs and connoisseurs alike to blind taste hand-picked local vintages served in black tinted glasses is the talk of the town, I’m told. Its neighbour, Vinophilie, which has kept Montreuillois’ cellars stocked since 1987, is also enjoying a new lease of life under the headship of long-time employee-turned-owner (two weeks ago and counting) Jean-Benoît Leclercq.

“Institution or not, you can’t rest on your laurels,” he says firmly. “You have to move forward and Montreuil has always been great at doing that. It’s a unique town, one that knows how to evolve.”

It’s pillars of the Montreuil foodie scene like him and Ludivine who are inspiring a whole new crop of restaurateurs to join the fold. At a time when novelty food stores and concept cafés are putting the key under the door at an alarming rate, the trend-bucking commune is catnip to ambitious entrepreneurs.

Ignoring naysayers, relative newcomer Sabrina Leblond, the mastermind behind Dragibonbons, was convinced her sweet store would thrive in a place like Montreuil. For the past five years, her (natural) gummies-based confections, from small party favours to large-scale bonbons sculptures, have sent the town’s sweet-toothed into a tizz. Likewise, when time came two years ago to put his galette-flipping skills to the test and open his very own Breton crêperie, Le Clan des Elfes, native Cédric Defebvre never considered anywhere but his birthplace – not even the obvious choice for such a venture: his self-confessed home-from-home, Brittany.

“There was no question to do it anywhere but in these old stones,” he chuckles, greeting a posse of lunchtime customers. “Of course we need to be modern but it’s important to be true to your roots and that’s what makes this place special.”

This tradition-meets-21st century tack is the very raison d’être of Anecdote, Montreuil’s answer to the capital’s edgy cantines and the perfect locale for a much-deserved spot of lunch. Opened in 2015 in the former Hôtel-Dieu hospital by two-Michelin star chef Alexandre Gauthier, whose legendary family restaurant, La Grenouillère, is located on the outskirts of town, the bistro revisits his feted father and chef Roland’s signature recipes with quite the contemporary twist.

“Montreuil is all about the pleasures of the table and sharing,” Martine says, eye fixed on her pudding. “It’s a place to indulge,” she gobbles up a heaving spoonful of poached pear and cream, “without moderation”.