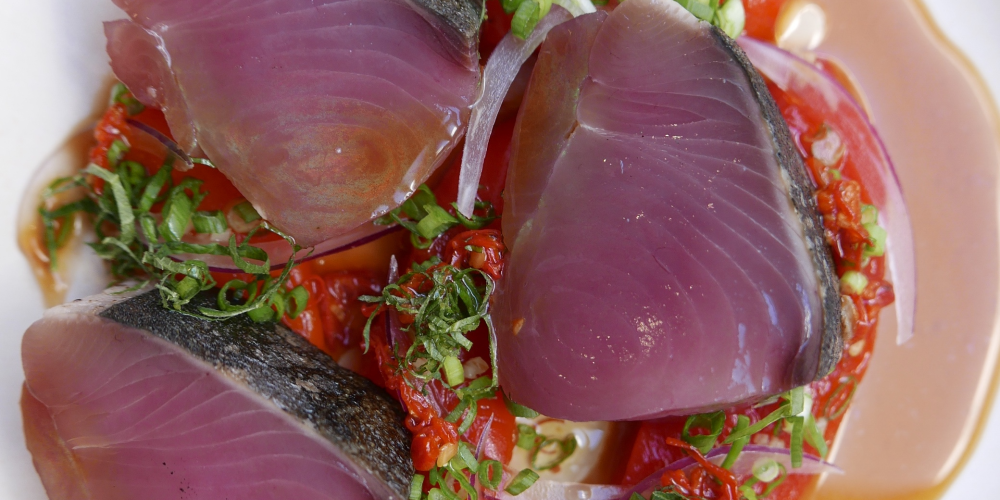 Try this pan-Asian recipe from one of the best new Paris bistros of 2019.

The pan-Asian Cheval d’Or in the 19th arrondissement is in the running to be named Paris’s Best New Bistro for 2019 in an awards ceremony run by restaurant guide Le Fooding. Judges have whittled it down to three, with Cheval d’Or up against Cuisine, a Franco-Japanese venue, and Le Maquis, which presents classic French dishes with a modern twist. It’s all down to a public vote and the winner will be announced on November 25. Cast your vote at bestnewbistro.com.

In the meantime, get a taste of Cheval d’Or at home with this recipe from head chef Taku Sekine.

For the red pepper

1Cut the bonito fillets, marinate them with fleur de sel and sugar for half an hour.

2Burn the bonito skin with a blowtorch. Slice the fillets.

3Bake the red pepper in the oven at 180°C. Smoke with hay. Once cooked, peel off the skin. Chop, season with salt and sherry vinegar. Set aside.

5Arrange on a plate, red pepper, red onion, spring onion, shiso. Place the bonito on top of it. Drizzle with sauce.