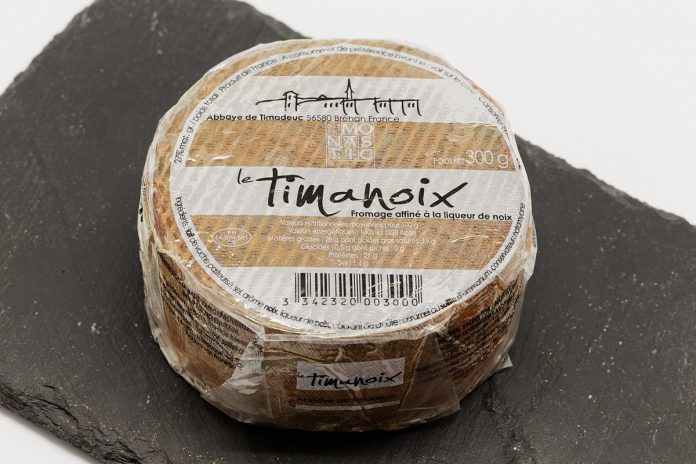 Brittany may not grace us with any time-honoured classic AOC cheeses, but it does have a strong history of monastic cheese production. These are typically cheeses belonging to the semi-soft washed rind family, which are often washed in spirits, the practice being common in monasteries as many also produce beer or wine.

Timanoix is a relative newcomer in this style, with a history spanning northward along France’s western coast. It is based on the well-known Trappe d’ Echourgnac, a cheese created by Cistercian nuns at the Abbaye Notre-Dame de Bonne-Espérance in the Dordogne. The sisters were kind enough to share the recipe with their brethren at the Abbaye Notre-Dame de Timadeuc in Brehan, and in 2003 Timanoix was born.

Unique to Timanoix and its predecessor is that they are both washed in walnut liqueur (noix being French for nut). The texture is smooth and dense, and the flavour simple yet satisfying with distinctive fruity and woody overtones courtesy of the walnut liqueur, the presence of which increases as you near the edible rind.

Timanoix makes for a unique offering on your next plateau de fromages;  think of it as the “wild card” and a whimsical departure amongst a selection of cheeses. It also pairs nicely with smoked meats and a crisp white wine or a Breton cidre.