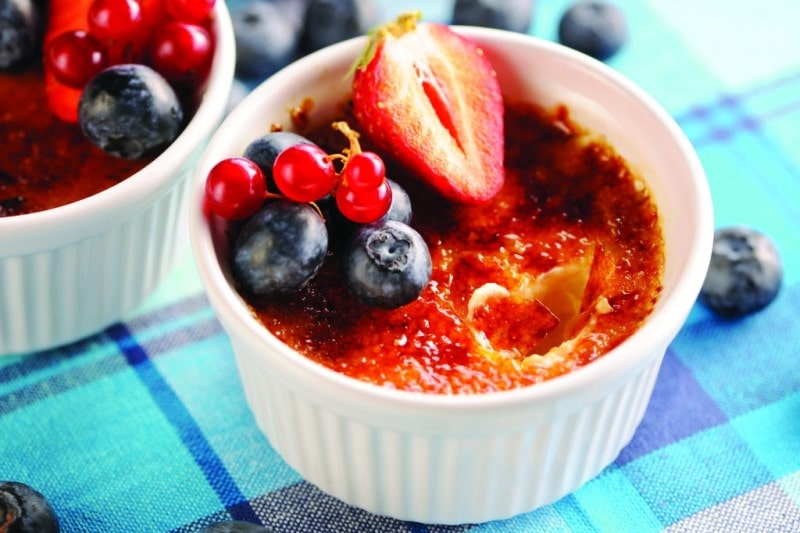 The crème brûlée is one of France’s best-loved desserts, but, as Florence Derrick discovers, various other European countries are laying claim to its invention

In one of France’s best-loved films, we watch as Amélie relishes that delicious moment when the crack of a spoon into the caramelised surface of a crème brûlée reveals the cool, creamy custard beneath. It’s rather fitting that l’Hexagone’s sweetest film heroine revels in its most famous dessert – although its Gallic origins have been much disputed.

The Brits, for instance, like to credit the invention of this creamy delicacy to Trinity College, Cambridge. A similar dessert was served to hungry young scholars there as far back as the 17th century, the college’s crest seared onto its sugar coating with an iron. Known as ‘Cambridge burnt cream’ (okay, it doesn’t have quite the same ring), the custard was typically unsweetened and with a thicker crust than crème brûlée as we know it today.

Meanwhile, the Spanish also want a piece of the pie, citing crema catalana as the precursor to crème brûlée. Though similar, this custard is made from milk and chilled to set, whereas the French recipe uses cream, oven-baking it in a bain-marie. The zest or juice of a Spanish orange often infuses crema catalana with a citrus tang. This would be considered unorthodox by a conventional French pâtissier, who’d advocate only the addition of a modest vanilla pod.

Custard-based desserts have graced European tabletops since medieval times and crème brûlée is the (sorry) crème de la crème, poised between finesse and simplicity. Happily, wherever its roots, we can enjoy it whether we’re in France or not – after all, the glory of that first crunchy-smooth spoonful shouldn’t be Amélie’s alone to savour.