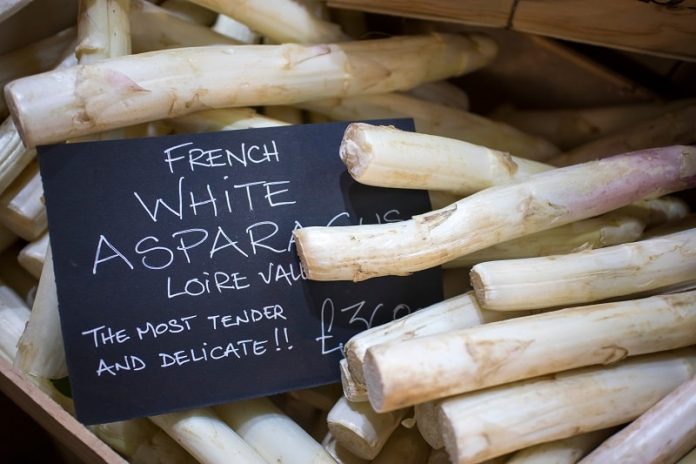 For those of us who love our greens, spring means one thing: the return of asparagus.

The season only lasts a few weeks, which makes it all the more astonishing that some 20,000 tonnes were produced in 2019, all carefully picked by hand. In France, it is mainly grown in the Loire Valley, the South-West, South-East and Alsace. The most common varieties are Argenteuil, grown in the Île-de-France, and asparagus from the Landes.

White asparagus, which is mainly grown in in Alsace, Camargue and the Landes, grows underground, hidden from the sun, giving it its mother-of-pearl colouring. Highly prized, it is harvested before it reaches the earth’s surface and is full of flavour and extremely tender.

Purple asparagus is left to produce shoots above ground just long enough for it to gain its distinctive shade and its nutty flavour profile.

Green asparagus grows entirely in the open air and is picked when it is about 20cm long and has the most pronounced taste.

HOW TO STORE AND COOK ASPARAGUS

Choose fresh asparagus, that is, straight with a tightly closed bud and a firm, undamaged stem. Store it for no more than three days, wrapped in newspaper or a damp cloth in the crisper of the refrigerator.

Asparagus is best blanched quickly in water or lightly grilled. Serve it with a tangy lemon vinaigrette, hollandaise sauce or mayonnaise. It is also great for dipping into a soft boiled egg! Once cooked, eat it immediately as it really doesn’t keep.

Produced on small family farms north of the Gironde river and near its estuary, Blayais asparagus is harvested from the end of February until the end of May. The black sands are rich in nutrients, which give the asparagus a sweet taste. It received IGP status in 2015.

This white asparagus owes its character to the terroir of the Landes, a marriage of sandy soil and a mild oceanic climate. It is harvested from March to June, then packaged in the Landes de Gascogne, which encompasses the Landes and other neighbouring départements. It was awarded IGP status in 2005.

Grown in very small quantities, Camargue white asparagus is a local delicacy, grown via the traditional method known as plastering or rushing, by which each side of the mounds, which are well exposed to the wind, is mulched, in addition to the traditional sowing of barley or rye. The sandy soil of the Camargue is a favourite for the production of white asparagus, which benefits from the salty marshes.

So it’s time to hit the kitchen and rustle up some beautifully light dishes, such as this one, for roast radish and asparagus in a lemon and cheese crumb.