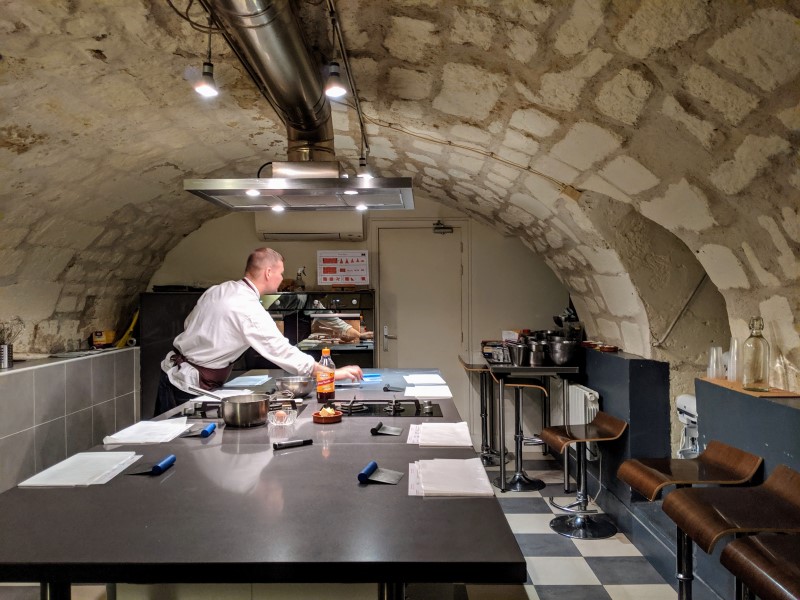 I came across La Cuisine Paris a few years back, thanks to a few mutual Instagram connections. I learned that they taught cooking classes and led food walking tours, and filed it under ‘things to do in Paris when I have more time’. As a visitor to the city, time is always precious, and spread thin between the many attractions beckoning at every corner. It took me three years and several trips to Paris until I managed to carve three hours out of an already packed itinerary, and schedule a baking class: how to make breakfast pastries, or Viennoiseries, as they are also called in France. And let me tell you this: after the class, the main question that came to mind was: why did I wait so long?

Classes are small, very hands-on, and full of practical information that will make your baking foolproof. The fun factor is also present, if you’re lucky enough to get Justin Ward as an instructor, like I did.

Justin is from a small Texas town, but has lived in Paris for many years and has layered his English with that charming French accent that always appeals to us Americans. He is a graduate of the prestigious Ferrandi School of Culinary Arts, and a gifted teacher. I say this as a person who has always been intimidated by the mere idea of baking French pastries. Yet somehow, Justin helped and guided me, and my seven classmates, to effortlessly accomplish that dream.

In pursuit of flaky, crunchy French deliciousness, I was joined by four Americans, two Canadians, and one Dutch person – the level of experience varying widely between us from seasoned baker to fearful novice. The class was tailored to fit everyone, regardless of prowess. We shared utensils, workspace, and ingredients, taking turns and being closely involved in every step. Turns out, making the perfect croissant doesn’t seem so daunting when you break the job into small, manageable steps.

We started out working with dough that was already made, due to time constraints. Dough needs to go through several stages before it is ready to go to the oven. First you make the détrempe, an elastic ball of dough, which should rest at room temperature for 30 min, then in the refrigerator for at least six hours. Then you start the tourage, or laminating, after which the dough needs to rest again for another 30 minutes. Finally, you shape your croissants, escargots, and pains au chocolat, place them on a tray, and let them rise for two to three hours until they double in size. Since we only had three hours to learn all the steps, working with pre-made dough made perfect sense.

After placing our pastries in the oven, we then worked backwards and learned how to actually make the dough from scratch. That must’ve been my favourite part of the class (well, except for the pastry tasting at the end). We made a well of flour and sugar directly on the work surface, placed the butter and yeast in the centre of it, and filled it with water at room temperature. We mixed all the ingredients gently with our fingers, slowly demolishing the well to incorporate the ingredients and form the dough. It was child-like, yet masterful, playing with ingredients and seeing them come together to form that beautiful, elastic dough we had started with. Also child-like was our excitement when the pastries came out of the oven, looking less than perfect but smelling divine. I don’t think I have ever had pastries that tasted as good as the ones I got to make myself.

Naturally, the steps are a bit more detailed and complex than my short account here. The best way to learn is to experience this class for yourself. La Cuisine Paris offers other classes as well. They teach classes on making baguettes, galettes des rois, bûches de Noël, macarons, choux, éclairs, and more. If you’re more of a cook than a baker, they offer various cooking classes as well, from making savory galettes to mastering French sauces.

La Cuisine Paris is at 80 Quai de l’Hôtel de Ville. Classes are taught in English and vary between 2-4 hours, depending on the topic. Please note that there is an age requirement. Attendees need to be at least 13 years old for the public classes, and minors need to be accompanied by an adult.