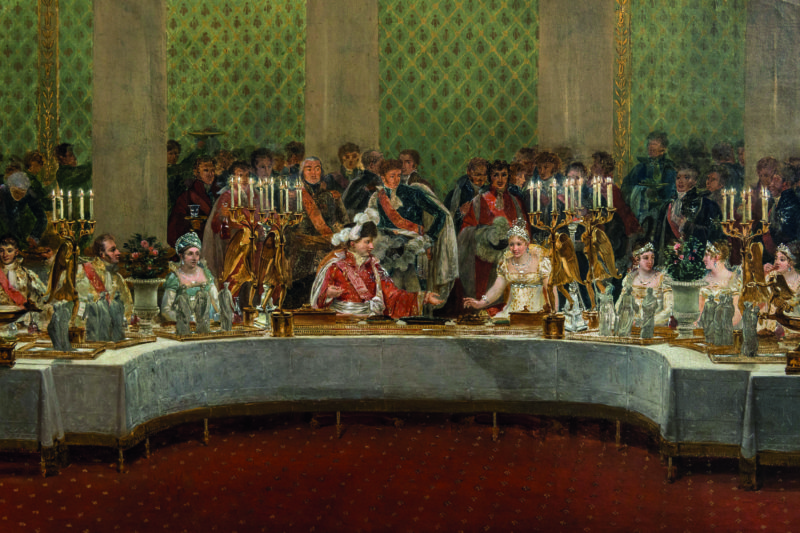 From the cheese emergency that brought down the monarchy to Napoleon’s fondness for waffles, we lift the veil on royals’ guilty pleasures

What makes a feast fit for a king? The long and short of it is: it depends on the monarch. From brie and salad to decadent croquembouches, French sovereigns’ péchés mignons ran the gamut. What blue bloods had in common, however, is gluttony, a propensity for excess and peculiar eating habits.

Take Napoleon I, who famously expedited every meal in seven minutes or less. That said, he didn’t make do with cold cuts and a glass of claret. He had quite the appetite and refined tastes to boot. Chicken drizzled in Champagne and cream-stuffed waffles were firm favourites. While the emperor gobbled up his supper in record time, his chefs often scrambled to keep up with his unpredictable schedule (and tendency to snack the day away). According to historian André Castelo, on one particular occasion, his cuisiniers roasted no fewer than 23 chickens in close succession (Napoleon couldn’t possibly dine on reheated food) until the emperor finally deigned to put his quill down and spare a few minutes for his meal.

Unlike Napoleon, Louis XIV rarely had to be asked twice to wolf down his nosh. But what few people know is that the voracious king was rather partial to salad. He could even polish off four plates of crudités in one sitting. As for Marie Antoinette, she heeded her own advice and gorged on cakes and her beloved sugar-laden macarons, washed down with champagne, on a daily basis. Centuries ahead of her time, the svelte queen had an inkling that it’s not so much about what you eat but when, and as such indulged only in the morning, giving her body plenty of time to burn off extra calories.

While the sweet-toothed reine exercised a modicum of restraint, gluttony and an endless supply of the world’s finest fare proved the downfall of many a crowned head. Louis XV’s queen, Marie Leszczynska, nearly died after slurping too many oysters and was even given last rites before making a miraculous recovery. Louis XVI was not so lucky. Legend has it the ravenous monarch demanded to stop during his flight to Varennes for a quick bite of his favourite Brie de Meaux. The ill-advised detour gave bloodthirsty Revolutionaries just enough time to catch up with the blue blood and run him straight to Madame la Guillotine.

This unfortunate hiccup aside, royals’ greed and whims went some way to transform eating habits and modernise dining etiquette. Tired of stray dribbles ruining his frilly collars, Henri III took a leaf from his Venetian neighbours’ book and introduced the (spill-proof) fork to Court. But what of modern rulers?

Although not absolute monarchs, over the decades presidents’ odd cravings and fussy palates have put the Elysée’s phalanx of chefs through their paces. Hollande abhors artichokes and asparagus and banned the pesky veg from the presidential palace during his term. His predecessor, Sarkozy, reportedly loves nothing more than to tuck into a heart-warming fondue. Jacques Chirac can’t resist a steaming bowl of tête de veau (boiled calf’s head) while Charles de Gaulle had a soft spot for Mimolette cheese. As for the republic’s new golden boy, Macron, he goes weak in the knees for cordons bleus (moreish cheese and ham kievs), and has them served at every official function. There’s no accounting for taste…