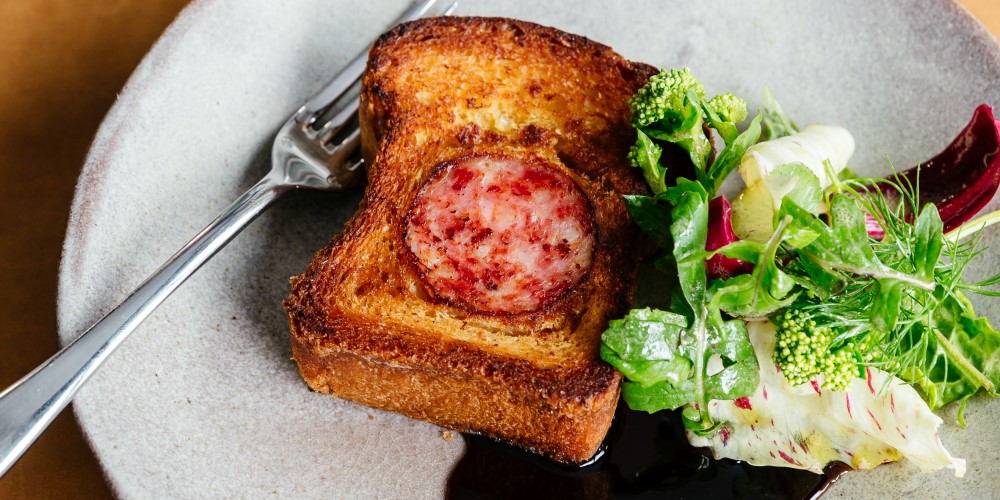 Add a touch of French panache to your Christmas menu with this recipe from Michelin-starred chef Gregory Marchand, owner of the Frenchie in rue de Nil, Paris, and London’s Covent Garden.

This easy saucisson brioche recipe takes the sausage sarnie to a whole new level! Both delicious and good-looking, it’s a common addition to Gregory Marchand’s Christmas spread – and here’s how to make it one of yours too.

1Using the hook, mix all the ingredients at a low speed until the dough makes a ball.

2Roll the dough into a ball and put it in a greased bowl.

1Cook the sausages in the boiling water for 20 minutes.

4Turn the sausages and bake for another 10 minutes.

1Make an egg wash (egg yolk and cream mixed together; can use water or milk instead of the cream).

2Divide the brioche dough into six.

3Roll out to a thickness of about 4cm.

4Cover the dough with egg wash.

5Cover a sausage with egg wash too, coat with flour and lay on the dough.

6Coat the sausage with the dough and place the opening towards the bottom in a well-greased terrine.

7Repeat for the other five sausages.

8Cover the buns with cling film.

11Turn the terrines and bake for another for 10 minutes.

12Test the temperature inside the brioche (it should be around 82°C to 85°C).

13Take them out if they have reached the right temperature.

14Remove the buns from the terrines immediately.

15Allow to cool before cutting.

16Cut a slice of brioche sausage, butter it and warm it on a griddle.

17Place the slice on the plate, with a seasoned green salad, the meat juice from cooking and some mustard on top.