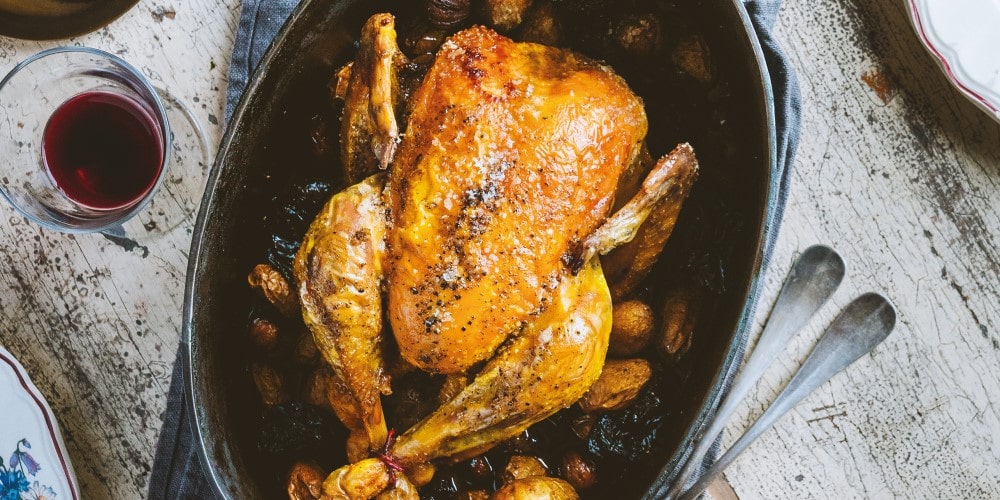 This recipe comes straight from one of Rebekah Peppler’s late November dinners. Since turkey isn’t common in France, she did what folks should maybe do for Thanksgiving anyway and roasted a chicken instead. The real star of the dish, however, are the prunes: They become plump and rich and soften to an almost cranberry sauce–like texture.

1Preheat the oven to 150°C. Pat the chicken dry with paper towels and season inside and out with salt and pepper. Place one of the garlic head halves and one lemon half in the cavity of the chicken. Tie the legs together with kitchen twine.

2Arrange the potatoes, prunes, and capers in a Dutch oven or large cast-iron skillet; drizzle with 2 tablespoons of the oil and the vinegar. Season with salt and pepper. Toss to coat, then make a space in the centre big enough for the chicken.

3Add the remaining garlic half (placed cut-side down) and the bay leaf in the centre of the skillet, then place the chicken, breast-side up, on top. Drizzle the chicken with the remaining 2 tablespoons of oil.

4Roast until the potatoes are very tender and the chicken is deep golden brown, 2½ to 3 hours. Transfer the chicken to a cutting board and set aside to rest for 15 minutes. Squeeze the juice from the second lemon half over the potatoprune mixture and toss to coat. Season with salt and pepper. Serve warm.