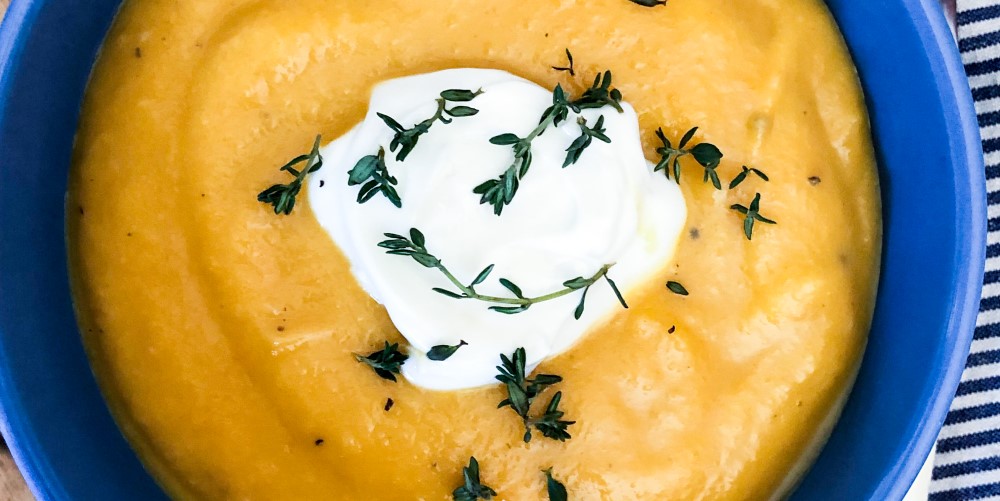 I love a good soup in chilly weather and this one will give you your five-a-day and then some. This soup, adapted from the recipe in my cookbook, In the French Kitchen with Kids, was inspired by the contents of my organic produce delivery box. I try to include mostly local items in the box, but in winter months it can be a bit bleak – lots of root veggies and not much else. Often, there’s only one thing to do with the contents of the box – soup! It’s a great way to get more veggies in your diet when it’s cold and this recipe comes together in no time. It will make enough for a few meals so it’s the perfect thing to make on a weekend for meals during the week.

1Melt the butter in a large pot over medium heat, then add the onion and garlic. Cook for about 5 minutes, stirring occasionally with a wooden spoon until the onion is just starting to soften but not brown.

2Add the sweet potatoes, carrots, turnips and parsnips and potato with the ½ teaspoon salt and ½ teaspoon pepper and give them a good stir in the pot to coat them well with the butter.

3Pour in the stock, increase the heat to high and bring to a boil.

4Turn down the heat to a simmer and cook, partially covered (with the lid slightly off the top of the pot), for about 30 minutes. The vegetables should be fairly soft at this point.

5Remove the pot from the heat and allow the soup to cool slightly.

6Use an immersion blender or a regular blender to purée the soup. Stir in the milk.

7Taste and adjust the seasonings with more salt and pepper, if you like. If you don’t find the soup creamy enough, you can swirl in a spoonful of sour cream or thick Greek yogurt and a sprinkle of fresh thyme just before serving.

Mardi Michels is the author of In the French Kitchen with Kids (Appetite by Random House, 2018) and the popular blog eatlivetravelwrite.com. She lives in Toronto, Canada, where she teaches French and cooking at the elementary school level and adult cooking and baking classes. She is a full-time Francophile who spends as much time in France (the Southwest) as possible!