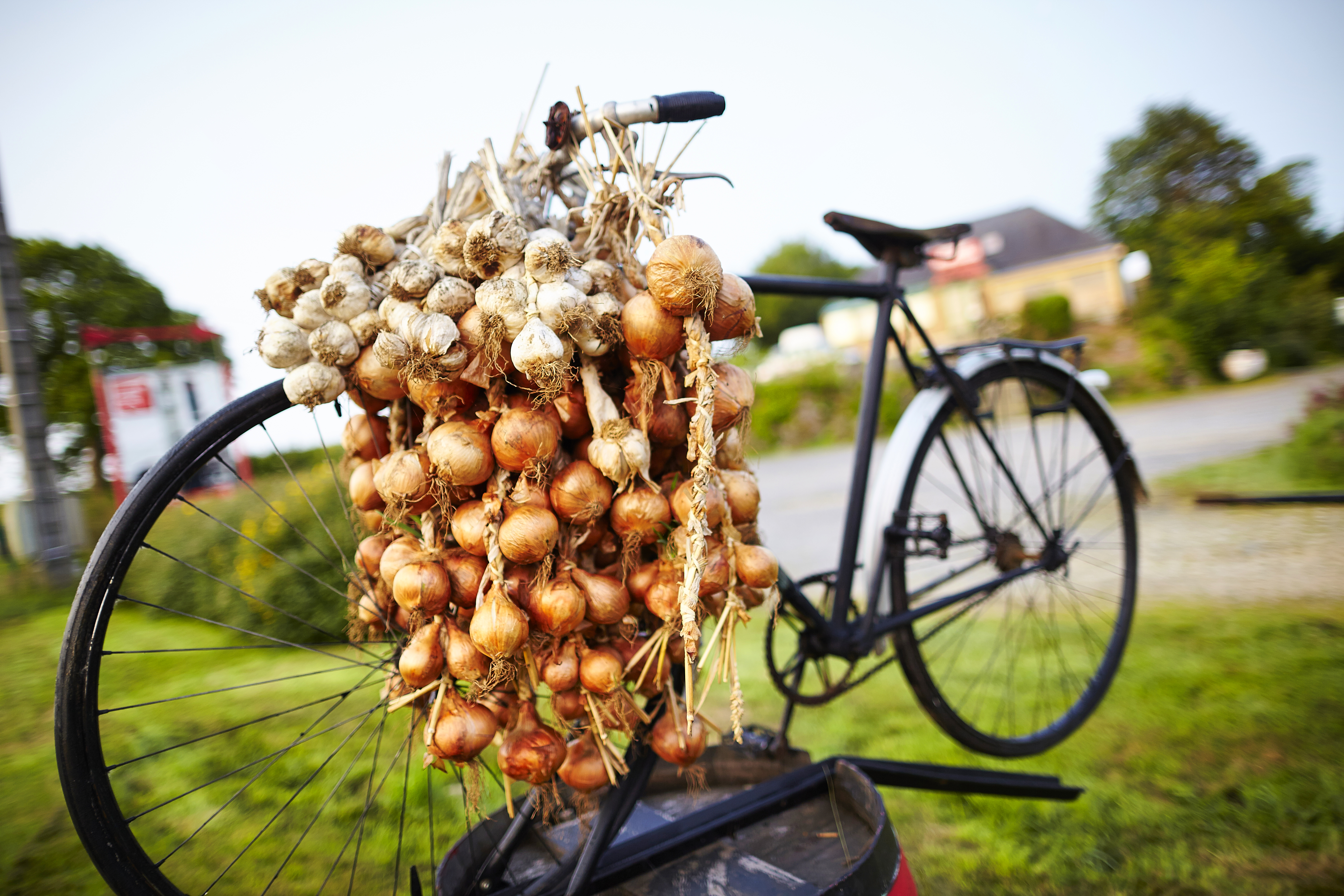 For most travellers, Roscoff is simply a ferry port – but the old town is a treat for the taste buds. Roscoff also started our stereotypical image of French men riding bikes, wearing striped tops and sporting a string of onions around their necks… more on this later.

Roscoff is a pretty town, with cobbled streets, boutiques and ancient villas built by wealthy ship-merchants. The surrounding land is especially fertile, producing some of the country’s best fruit and vegetables, the star of which is the Oignon Rose: the Pink Onion.

Sailors first imported pink onions from Portugal in the 1600s but they only flourished in the climate and soil of Brittany. They are prized for their sweet, delicate flavour, their high vitamin and mineral content and their longevity: properly stored, they keep for up to 10 months. They’re particularly delicious in salads, chutneys and caramelised onion tart.

Back in 1829, one enterprising local – Henri Ollivier – hired a boat and, with a few friends, took their onion harvest to England. They sold out almost immediately and it soon became a regular trade, as Roscoff men sailed over with their pushbikes, cycling forth each day with strings of pink onions around their necks, covering the entire country. By 1909, 1,300 onion-sellers made the trip! Naturally, their striped Breton tops were instantly recognisable and gave us our French stereotype – and because so many Bretons were named ‘Jean’, British people called them ‘Johnnies’. Their full history is lovingly explored in the La Maison des Johnnies, a small museum based in renovated barns in Roscoff (with audio guides in English).

The Roscoff Pink Onion has been awarded the official AOC quality label and the town holds a Fair every August to celebrate the new harvest, complete with family activities.

Onions aside, there’s plenty to please the palate all year round in Roscoff, including fine dining at very fair prices. Le Brittany is a four-star hotel with a renowned seaview restaurant run by Michelin-starred chef Loïc Le Bail (three courses from just €65), and 10 minutes away in Saint-Pol-de-Léon you’ll find La Pomme d’Api, run by another Michelin-starred chef, Jérémie Le Calvez (three courses from €52). If you know your onions, you’ll know that’s a bargain!