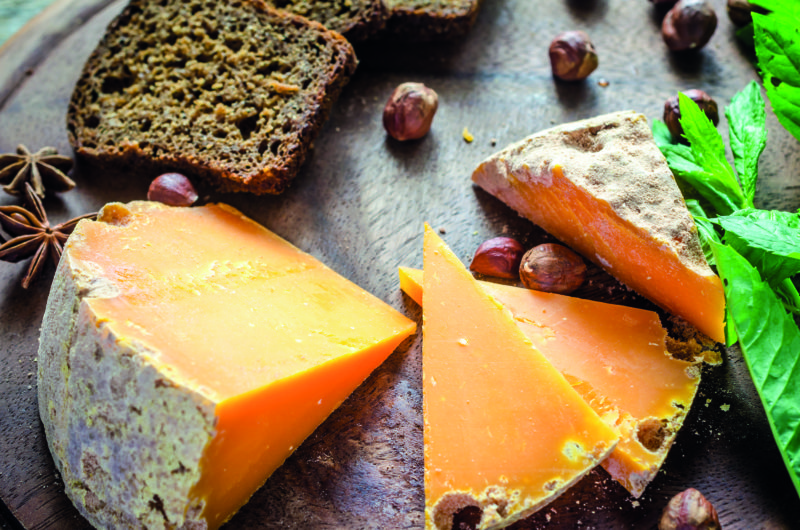 If the thought of a colony of crawlies (albeit microscopic) scuttling over cheese makes your stomach churn, avert your eyes now. For we’re about to discuss the unsavoury secret behind Mimolette’s trademark nutty tang.

In one (spine-tingling) word: mites. The little bugs burrow in the rind and munch their gluttonous way through the thick skin, leaving behind a trail of flavour-filled dust. Technically a Dutch concoction, Mimolette, also known as Boule de Lille or Vieux Hollande, received a French makeover of sorts in 1675, during the French-Dutch war. Louis XIV’s wily Minister of Finance, Colbert, banned the import of the brittle cheese and instead ordered Flemish farmers to come up with an equally mite-smattered alternative. The rest, as they say, is history.

The scrummy fromage (if you don’t give the mouldy crust a once-over) has tickled the discerning palates of France’s most esteemed figureheads, not least the late president Charles de Gaulle. Quite the vote of confidence from the notoriously picky statesman, who may or may not have been apprised of the fabrication process. Records are a tad fuzzy on that front. Of course, the mites are long gone before Mimolette reaches our cheeseboards. Their task complete, the beasties are swiftly removed, usually with a blast of compressed air or firm hand-brushing. Though cheesemakers can’t always account for the odd straggler…