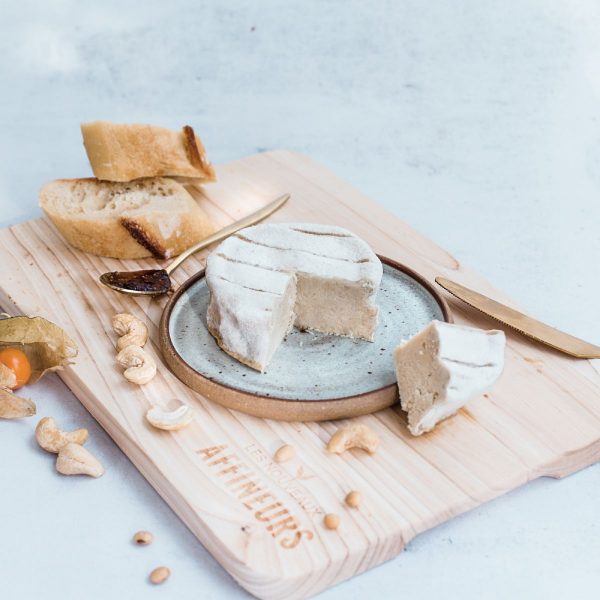 France has taken veganism to its heart and now there are specialised vegan creameries bringing cleverly made, elegant taste sensations to make sure those on a plant-based diet don’t have to miss out on the gooey delights of fromage.

Founded by Nour Akbaraly in 2017, Les Nouvelles Affineurs pride themselves on making 100% organic and natural, plant-based cheeses without sacrificing flavour. Their motto is “Let’s keep the fun, let’s change our habits” and as well as being vegan, their products are lower in fat, free of cholesterol and more easily digested than regular cheese, so are great for those with a lactose intolerance. They are also free from additives and preservatives.

Try this! L’affiné d’Albert (€11.90) has a flowery rind and pungent finish in the mouth.

On rue Paul Bert in the 11th arrondissement of Paris, you’ll find the country’s first specialist vegan cheese shop, run by Venezuelan-born Mary Iriarte Jähnke.  Check out her astonishing array of cheeses, which she makes with her husband, and be sure to try the joie gras, which she makes from cashew nuts.

Try this! Jil with bags of character and a slight tang on the palate, this cheese, made from organic almond milk, has a flowery rind and is just €6.90 for 90g. Délicieux!

In 2015, Emmanuel Joubert quit his job in marketing for a multinational company and decided to focus on his passion for cooking, wine and ecology. Increasingly concerned about the state of the world his children would inherit, he set about founding his plant-based cheese company in 2016.

Using ingredients which are fair trade and organic, they produce thoroughly tasty cheeses of many styles from melting varieties such as La Carrée to Le Rouillé, a pungent washed rind cheese available in three flavours – plain, cumin  and  tarragon.

Try this! CamemVert,  made from organic cashew nuts, is fermented and matured for many weeks until it develops a rich, creamy character. Try it plain or with sage or black garlic. €7.90.