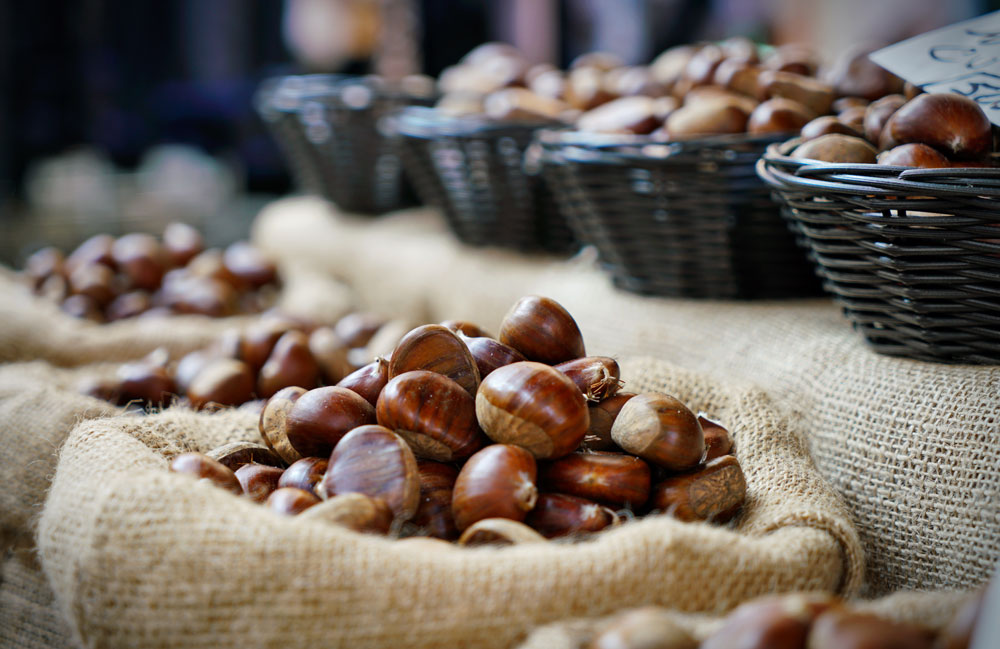 It might not yet be time for roasting them over an open fire, but in Cantal village of Mourjou, one of France’s Sites Remarquable du Goût, it is time to celebrate the chestnut harvest.

Once peasant’s food (mixed with rye to make ‘poor man’s bread’, it was enough to keep a family and its pigs going), the Châtaigne de Mourjou now has a place on France’s roster of gustatory greats.

Modernisation of farming practices and various diseases almost put paid to the region’s chestnut groves but a few specialist ‘castanhaires’ in Mourjou have been hard at work in recent decades, maintaining the trees and finding new uses for the chestnut beyond their annual appearance at Christmas markets.

There are about 20 local varieties of chestnuts, the most widespread of which are Jan Fau, Savoia (Savoie), Paqueta (Paquette), Verdala (Verdale), Tomiva (Toumive) or Marona (La Marronne). They can be enjoyed in jams or with cold cuts, and can be used to make flour for pastries and bread. Other local specialities include chestnut cream and chestnut beer.

Located in the south-west of the Auvergne Rhône-Alpes region, the Châtaigneraie cantalienne covers 50 communes and is a wonderful spot to visit, with medieval villages and Petites Cités de Caractère at every turn, such as Laroquebrou, Maurs, Marcolès and Montsalvy. Be sure to drop in to the Maison de la châtaigne at Puycapel, where in an old farmhouse typical of the chestnut groves you can learn all about the industry and its traditions. There’s even a replica 1950s grocery store and a virtual tour of the medieval underground tunnels discovered on the site. Check the website before you go as there are cooking workshops offered throughout the year, from jam-making to techniques such as grafting.

But back to the celebration of the harvest in Mourjou. Held each year since 1990 on the penultimate weekend of October, La foire de la châtaigne de Mourjou keeps alive the culture and traditions of chestnut farming, with market stalls, music, hikes under chestnut trees, tastings, demonstrations, chestnut braiding and more.

Find out more about the area by visiting the Puycapel website and the Châtaigneraie cantalienne tourism website.