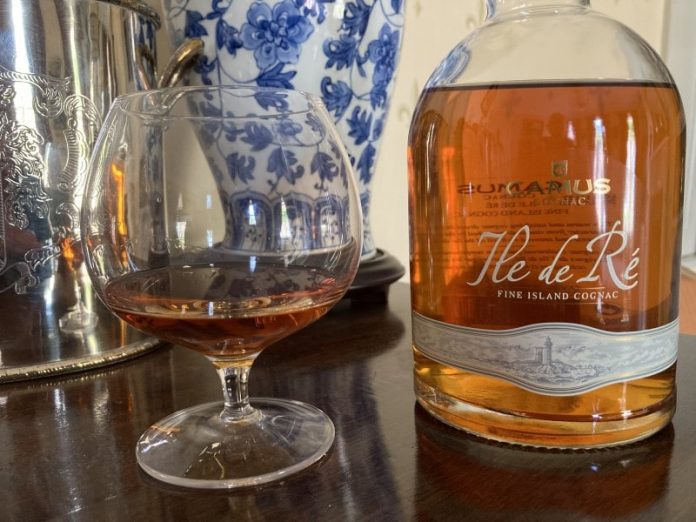 The Isle de Ré is a little chunk of paradise anchored just off the coast of south-west France close to the ancient fishing port of La Rochelle. With a ‘low traffic’ policy, most of the population and nearly all tourists travel around by bike on the excellent and well-maintained, wide cycle paths. Those that have visited the island have probably done so a dozen times – you tend to get addicted to its relaxed, healthy lifestyle.

On such a small island, the influence of the sea is everywhere. The town of Saint-Martin-de-Ré, with its colourful fishing harbour, overflows with seafood restaurants, many fronting the quaysides where local fish and shellfish are unloaded from the tiny boats. Cycle paths run for miles with vineyards on one side and saltpans on the other.

However, few will know that there is actually a cognac produced from grapes of the vineyards which cover a large part of the island. The land being flat and not particularly fertile, vines are able to thrive sufficiently to produce grapes for thin, acidic wines from such varieties as Ugni Blanc and Colombard. Not the sort of stuff fine wine is made of, but absolutely ideal for wines for distillation.

The highly regarded Cognac house of Camus takes the wines made from the grapes grown on the island to craft a first class, aromatic Cognac called Isle de Ré Fine Island. The maritime influence of the Atlantic breezes which embrace the vines and grapes throughout the growing and ripening period, impart a gentle saline character and the patented distilling technique of Camus, captures this oceanic influence in the aromatics of the Cognac.

This warm and satisfying cognac, exudes a hint of salinity, testifying to the island vineyards caressed by the ocean breezes and grown in soil rich in seaweed. Aromas of sultanas and vintage orange marmalade add to the lively, dry and subtly oaked palate of this exceptionally fine cognac. Camus has recently launched a French Connection cocktail kit with their own twist, enabling the buyer to make the ultimate in fine tasting cocktails.

The French Connection cocktail appeared in the early 70s, named in recognition of the great 1971 film with Gene Hackman, although the name of the creator seems to be lost in the mists of time. In essence, it is a simple cocktail, combining equal parts of cognac and amaretto liqueur, poured over ice in an old-fashioned glass and garnished with a twist of orange peel.

The action-thriller, starring Gene Hackman, was filmed in New York and in the Marseille region of southern France and was loosely based on the smashing of a heroin smuggling drugs ring. Happily, the cocktail has none of these ingredients, but is a combination of a famous French spirit, cognac, and a well-known Italian almond liqueur, amaretto, a slightly different French Connection.

A proper French Connection needs a very aromatic cognac and an amaretto which is not too sweet in order to achieve balance and elegance.

The second ingredient chosen by Camus, is Amaretto Adriatico from Italy. The flavour of roasted almonds is extracted through a unique distillation process, with almonds harvested from groves near the Adriatic Sea in the southern Italian region of Puglia. A ‘secret’ added ingredient is a pinch of sea salt from salt pans on the Adriatic coast, matching perfectly with the fresh, marine notes of Camus Ile de Ré. Brimming over with almond character on nose and palate, the subtle salinity balances the sweetness of the liqueur.

The Camus French Connection is great as an early evening cocktail, but really comes into its own as an after-dinner cocktail, with the punch of strong spirit, balanced by the sweet liqueur. Using such top-quality ingredients gives tremendously satisfying, complex and intriguing aromatics and lingering flavours on the palate.

This great cocktail, recognised by the International Bartenders Association, can be enjoyed at home by ordering The Camus cocktail kit, which includes a full bottle of each of the ingredients described above, online for €69, plus a small delivery cost. It even includes a tumbler and mixer spoon. All you need is ice!