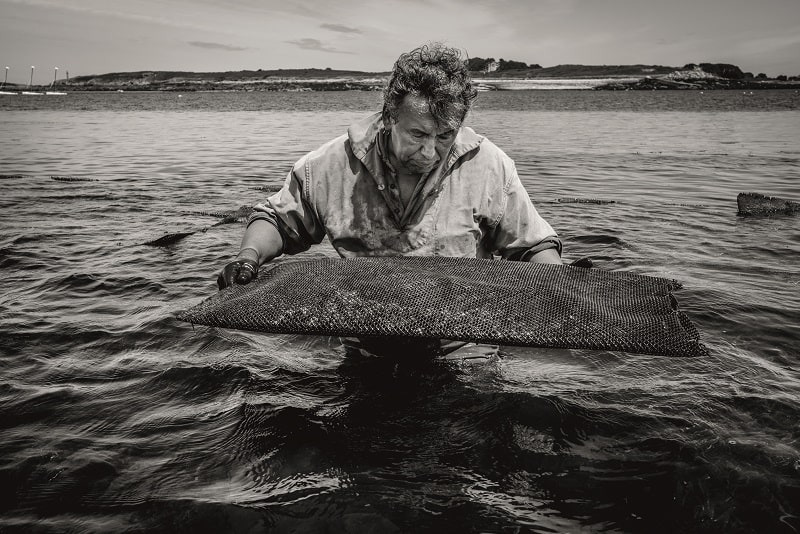 Oysters, langoustines, mussels, scallops… Brittany is the place to come for seafood – and the locals certainly know how to throw the best bashes to celebrate its feel-good bounty

For Hemingway, it was oysters “with their strong taste of the sea and their faint metallic taste… and succulent texture” that made him lose his “empty feeling and begin to be happy”.

It’s langoustines that float my boat, though – first joyfully sampled with my parents many years ago in Carnac, and revisited one balmy summer evening more recently with my husband at Locmariaquer on the Gulf of Morbihan.

Sitting on the terrace of a laid-back restaurant overlooking the bay, we worked our way through a platter piled high with these plump, juicy treasures glistening with garlic butter. We licked our fingers and laughed at each other’s efforts to peel them – the light, crisp white we drank matching our mood – as the sun set over the glass-like sea.

Brittany’s shoreline extends for an astounding 2,800km and the sea’s influence on the region’s cuisine (as well as culture and style) is undeniable. Fruits de mer, in their various forms, top the menu at hundreds of eateries in the towns and villages that dot the coastline.

At his two-starred restaurant in Carantec, Finistère, chef Patrick Jeffroy sums up the region’s love affair with food and the sea: “The abalone, the langoustines – it is wonderful what the sea gives us here… The haricots de mer, the seaweed…”

If you’re as passionate about seafood as the people of Brittany, then come and visit when one of the annual festivals is in full swing. These joyous celebrations combine the best of the area’s entertainment with local traditions and the chance to try some of the finest seafood you’ll ever taste: firm favourites, or something you’ve never sampled before.

Among the biggest is the Fête de la Coquille Saint-Jacques. The Bay of Saint-Brieuc is home to three scallop-fishing ports: Saint-Quay-Portrieux, Paimpol and Erquy. They take it in turns to host an enthusiastic shindig marking the end of the scallop season.

In 2020, it’s being held in Erquy on April 18-19. Here you can meet some of the local scallop fishermen, plus there are fishing trips, street parades, music and, of course, oodles of scallops. According to one of the organisers, in 2018 there were 72 artists, 60 exhibitors, 10,000 meals were served and a whopping 45 tons (yes, 45 tons!) of scallops were sold.

“The scallop is the treasure of the Bay of SaintBrieuc,” she says. “With 217 shellfish vessels, shell fishing is truly emblematic of the Côtes-d’Armor.” With the aroma of scallops cooking in garlic wafting through the crowds, and the sound of exuberant singing and dancing as locals celebrate the area’s Breton and Celtic roots, come prepared to let your hair down.

Saint-Brieuc also has two Michelin-starred restaurants where you can enjoy scallops in more sedate surroundings – La Vieille Tour and Aux Pesked – and was awarded the European Destination of Excellence in Gastronomy in 2015. August sees the Folies en Baie à Hillion, created in 2001 by the Friends of the Hillionnaise Mussel. The organisation has made it its mission to let people know just how good the wonderful mussels of Saint-Brieuc are.

And word is certainly spreading, with 8,000 visitors last year. It’s free to get in and there is fabulous food on sale, showcasing the bay’s top-notch mussels, craft stalls, children’s amusements, outdoor exhibitions, a fashion show and more.

As every year, concerts will accompany the tasting of the local bouchot mussels, flagship seafood of the Bay of Saint-Brieuc – although, the local scallop fishermen might have something to say about that…

The one I’ll be visiting, though, is the Fête de la Langoustine in Plobannalec-Lesconil, also in August – its fishing port is where the langoustines are pulled from the sea.

On the menu are a trawler cruise, various exhibitions, games for children, concerts, tasting sessions galore and fireworks. Still famished? After the revels, head to Bistrot du Port overlooking the bay for round two.

Over in Locmiquélic, there’s another Fête des Langoustines, also in August, which in 2019 celebrated its 84th anniversary. Visitors can expect live music, partying, a parade of decorated floats and copious langoustines served in all styles – with mussels also making an appearance.

If, like Hemingway, oysters are your thing, head to Cancale where they are grown in ‘parks’. At family-run La Ferme Marine, you can see the oyster farmers at work. Eat these delicacies in style at one of the town’s or the environs’ many restaurants such as Le Coquillage, owned by top chef and Cancale native Olivier Roellinger.

Or just mooch down to the marché aux huîtres around the base of the Pointe des Crolles lighthouse, buy a dozen and enjoy them – there and then – with just a squeeze of lemon and the sound of the waves as accompaniment. If you’re here in September, you can join in the oyster fest known as Huîtres en Fête, which enjoyed its first outing in 2019. “It was held on the beach on the Port de la Houle, the historic heart of oystering in Cancale, where the bisquines (oysterdredgers) come in with the tide to unload their catch,” one of the organisers tells me.

“The day’s activities included a live broadcast of oyster dredging from La Cancalaise, a bisquine built 32 years ago; cooking demonstrations from chefs whose restaurants are on La Houle; a regional oyster-shucking contest; and lots of opportunities to learn about (and taste!) the oysters from Cancale.” It’s a real celebration of everything oyster-ish.

At Huîtres en Fête, you can taste the oysters pulled fresh from the sea and learn about oystering in Cancale, past and present, from the people who are continuing the tradition today.

So join the happy throngs, dancing, singing, quaffing, slurping, munching, crunching, shucking and celebrating around Brittany’s coast this year – Hemingway would be in his element (especially after a few oysters)!

First printed in our publication Taste of France