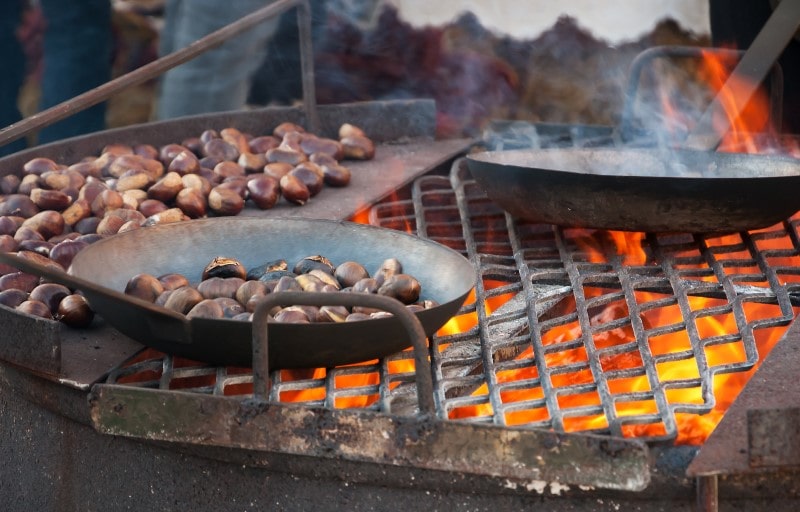 Synonymous with autumn fruit, and (dare we say it?) Christmas, the chestnut is good for more than just roasting on an open fire… although they’re pretty delicious that way, too!

In season from October to December, in France chestnuts  are called les châtaignes – not to be confused with les marrons d’Inde, or as we know them, horse chestnuts, which are great for playing conkers but are poisonous to eat. Just to confuse matters, in common parlance, the French use the word marron when referring to processed chestnuts, such as marrons glacés, – which are, in fact, les châtaignes which have been glazed in sugar syrup.

Originally from Asia Minor, this extremely nutritious nut can be enjoyed in desserts and salads and a wealth of other recipes.

To tell whether or not you’re buying them at their freshest, look for ones which are smooth and shiny in appearance with no visible holes. A handy hint is to choose ones which are heavy. You can check there are no worms inside by putting them in a container of water: if they float, don’t eat them! There’s a good chance they’re hollow, having been scoffed by a worm already.

Store them for up to a week away from heat and humidity.

Ardèche PDO chestnuts have a long history dating back to the 14th century and were used as a form of currency alongside wheat or salt. This heritage fruit is these days grown in chestnut groves on small farms, a tradition passed down from generation to generation. The groves are a huge asset when it comes to biodiversity and help to protect the territory against fire and erosion.

In 2020, 8,857 tons of chestnuts were produced in France – be sure to treat yourself to some next time you’re au marché! And if you still can’t decide what to do with them, how about this incredible Charlotte aux marrons with Beaufort cheese?