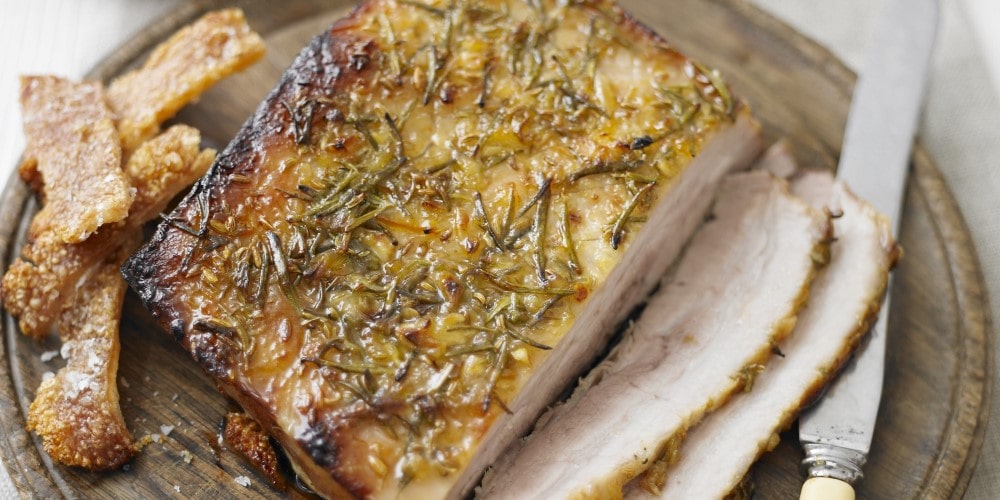 This is a pork belly that’s slow-roasted so the fat renders and cooks the belly confit-style in its own fat. The result? Ridiculously juicy, impossibly tender yet still-sliceable meat

2Put the belly of pork in a large roasting tin and add the cider, stock and rosemary. Bring to the boil on the hob, then cover tightly with foil and poach in the preheated oven for 3 hours. Leave to cool.

3Meanwhile, in a pestle and mortar or a strong bowl with the end of a rolling pin, pound the garlic, olive oil, 2 teaspoons of the salt and the fennel seeds to a rough paste. Add 2 tablespoons of the marmalade and pound for a further few seconds.

5Drain the pork, reserving the cooking liquid. With a sharp knife, cut away the rind from the pork fat and set it aside on a large piece of foil. Score the fat with a sharp knife.

6Rinse out the roasting tin, return the meat to the tin and spread the fat with the marmalade mixture. Rub the pork rind with the remaining salt.

7Put the pork in the oven, with the pork rind on a shelf above, and roast for 10 minutes. Reduce the temperature to 200C (fan oven 180C), gas mark 6, and continue to roast for a further 20-25 minutes until the pork is golden brown and the crackling crisp.

8Meanwhile, put the poaching liquid in a large saucepan with the remaining marmalade and bring to the boil. Bubble for a good 10-15 minutes until reduced by about two-thirds.

9Mash the flour into the butter and whisk into the liquid. Return to the boil, whisking all the time, and cook until lightly thickened. Adjust the seasoning to taste. Serve the pork carved into thick slices with shards of crispy crackling and the gravy.