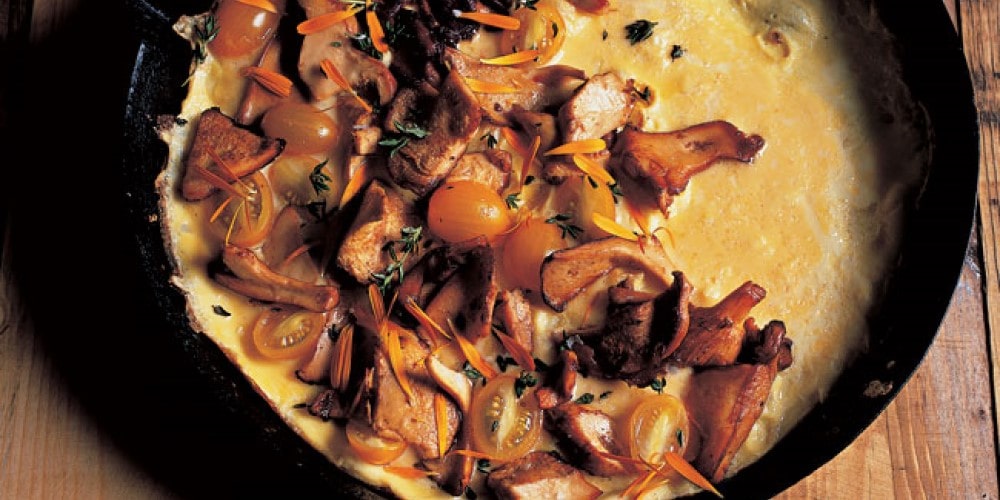 The word ‘omelette’ comes originally from the French word lamelle, meaning ‘thin strip’ because of its flat shape, and gradually changed via alumette and then amelette. However, although omelettes are claimed by the French as one of their great culinary creations, you will find that everyone has an opinion, a criticism or an infallible tip to offer. Indeed, the great food writer Julia Childs took them so seriously that she considered keeping a pan solely dedicated to omelette-making a “wise decision”.

Omelettes are the ultimate in fast meals – supposedly ready in just 30 seconds – but can involve a whiff of competition and performance that I hate. It is an intensely personal thing to make an omelette for anyone, but I reckon that as long as it stays foamingly soft in the middle, yet hot enough to melt the cheese if you are using it and doesn’t burn on the outside, you can give yourself a gold star.

If you feel like having this omelette, don’t deprive yourself just because there are no marigolds to hand – I only added them here after an opportunistic forage in the garden! But by the same token, if you find some, perhaps they will encourage you to make this dish. They do look pretty scattered over the tomatoes and add a subtle peppery taste.

1Fry the mushrooms in olive oil, then drain on kitchen paper and keep warm.

2Whisk the eggs with the milk, then season with salt and pepper.

3In a separate pan, heat some more olive oil until nice and hot, then pour in the egg mixture.

4When the eggs are nearly cooked through, add the raw tomatoes and cooked mushrooms. At this stage you could add some cheese if you fancy it.

5Sprinkle in the flower petals, fold the omelette over and serve.