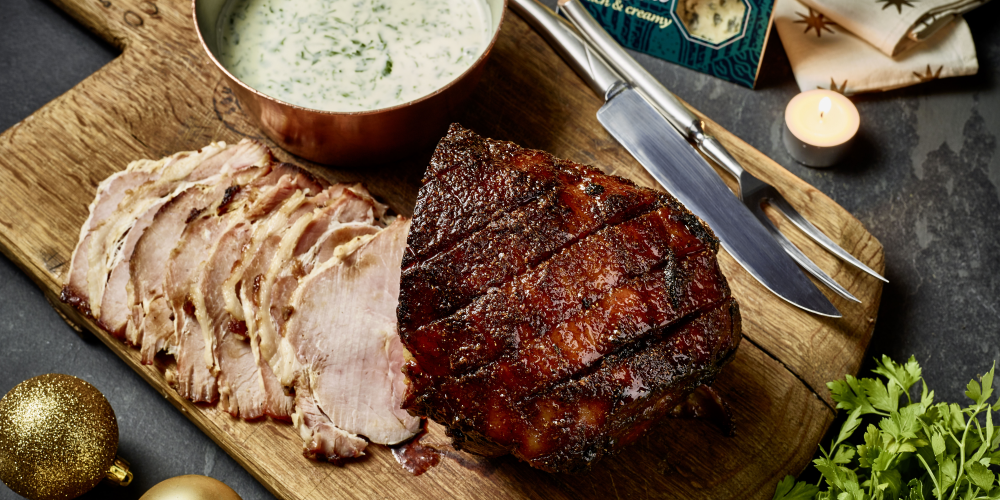 Raymond Blanc’s recipe for festive glazed ham with Saint Agur blue cheese and parsley sauce is a real showstopper of a main course for any Christmas table, forming the perfect centrepiece. The Saint Agur blue cheese and parsley sauce helps to beautifully balance the sweet, spiced crust of the ham. And any leftovers are heavenly served cold as part of a Boxing Day buffet. If there are any leftovers, of course…

For glazing the ham

For the Saint Agur and parsley sauce

2In a large, deep roasting tray, place the ham on top of all the chopped vegetables and herbs.

3Place in the oven, then carefully pour the boiling water in to the roasting tray and loosely cover with tin foil.

5Carefully remove from the oven and place the ham onto a clean tray to cool slightly. Strain the cooking liquor and leave this to cool before storing in the fridge or freezer as stock for other dishes such as risottos, soups or stews.

6After about 10 minutes the ham should be cool enough to handle. Carefully remove the skin and discard. Ensure you leave as much fat as you can on the ham as this will help to give you a lovely crust, plus the fat is where all the flavour is!

For glazing the ham

1Using a pastry brush (or the back of a spoon), lightly brush the mustard all over the ham including underneath.

2In a small bowl, mix together the spices and sprinkle all over the ham, then drizzle the ham with the honey and finally sprinkle with the Demerara sugar.

3Place the ham back in the oven for 40 minutes, making sure you baste halfway through, until golden all over.

For the Saint Agur and parsley sauce

1Whilst the ham is caramelising, melt the butter in a medium saucepan on a high heat, stir in the flour and cook gently for 1 minute, stirring all the time.

2Remove from the heat, add all the milk and whisk until the butter and flour have evenly dispersed. Place the pan back on the heat and bring to the boil, stirring all the time.

3Reduce to a simmer and cook for 2 minutes.

4Take off the heat, whisk in the Saint Agur blue cheese and chopped parsley and place in a sauce boat ready to serve with the ham.

1Once the ham has caramelised, remove from the oven, carve and serve with the Saint Agur blue cheese and parsley sauce.