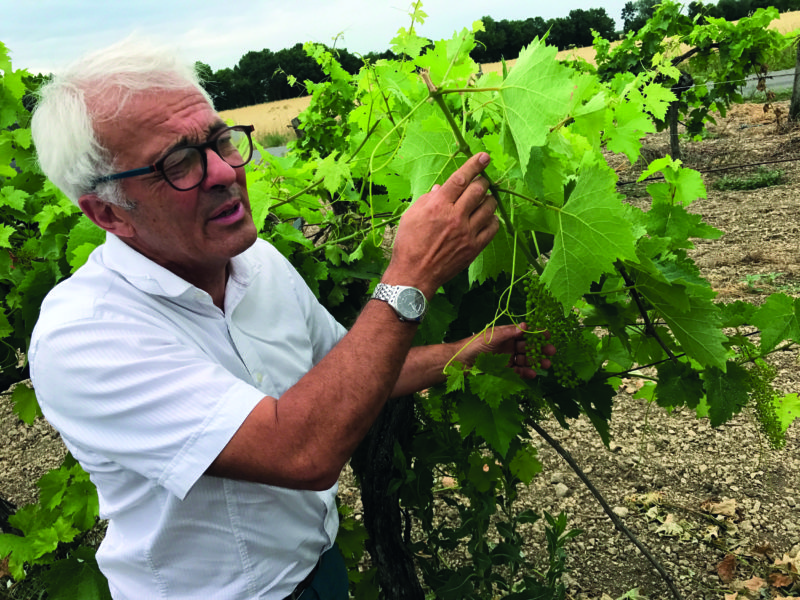 Our interview is about to begin but Jean-François Rault is nowhere to be found. Relentless downpours and thunderstorms have taken their toll on the Distillerie du Peyrat’s sprawling vineyards, I gather from one of his associates in between a stream of apologies. And Jean-François has had to zip off to the domaine for a quick once-over.

As an organic producer, he simply can’t afford to take any chances. “Organic farming is complex: you have a lower yield and you have to contend with the weather – the risks are much higher. All the rain this year hasn’t helped,” he explains later, fresh from his impromptu inspection; his jovial tone at odds with the visions of antediluvian flash floods swirling around my mind. Contending with capricious weather and constantly hedging against the spread of diseases is just part and parcel of sustainable farming, and farming full-stop, he adds casually.

One of a relatively new wave of terroir-focused producers, he insists he was not the first in Charente to hop on the organic bandwagon. In fact he had seriously considered going bio, as the French call it, in 1990 – eight years before he eventually took the plunge – but faltered at the last minute overwhelmed by the potential drawbacks and the prospect of sinking his centuries-old ancestral business.

“In the end it was down to personal conviction,” he says firmly. “But it was risky,” concedes the 63-year-old, whose family has been distilling (or ‘burning’ as it was then referred to) eau-de-vie on-and-off since 1630. “That’s why it took a few years to eventually make the leap. But we were not the first. There were three or four precursors in the mid-1970s. Let’s just say I’m part of the second wave, and we were the first relatively large distillery to go bio. I couldn’t in all conscience keep making a product that might carry pesticide residues.”

Two decades on, he remains one of a handful of trailblazing organic producers in the Cognac region. For all the unpredictability of organic production, he would do it all over again, he explains. The positives have far outweighed the negatives. There have even been some unexpected side-benefits. “The result is really worth it. First, I felt a lot less guilty about destroying our planet,” he chuckles. “That in itself fills you with indescribable satisfaction and pride in your product. And there’s no doubt it improves the quality and flavour of cognac. The vines produce a far better wine. They take root deeper in the soil which leads to a stronger expression of the terroir and intensity.”

His gamble has paid off tenfold. His pleasantly round yet lively crus have tickled the discerning palates of buyers the world over, and Distillerie du Peyrat is now the top-selling organic cognac label in the United States, no less. But for all his transatlantic kudos, he concedes that flying the flag for organic in an industry still resistant to change has had it challenges.

“Most people have no idea there is such a thing as organic cognac,” he sighs. “It’s because the offer is very limited; only one or two per cent of the Cognac region’s overall production is organic.” France’s general apathy towards cognac has not helped matters. A measly two per cent of all cognac is consumed in France, according to Jean-François. A state of affairs he blames on the industry’s failure to refresh its old-fashioned “grandpa’s drink” image and pique the fancy of millennials.

That being said, of late he has noticed a slow but steady shift in the French market, thanks no doubt to the growing demand and sweeping trend for organic fare. While quietly confident this could herald a new dawn for cognac on home turf, he is under no illusion the change will happen overnight.

“I think organic farming speaks to people and it’s shaken up the French market, renewed consumers’ interest in cognac. You can feel it changing – slowly – but changing nonetheless. Time will tell.” distilleriedupeyrat.com