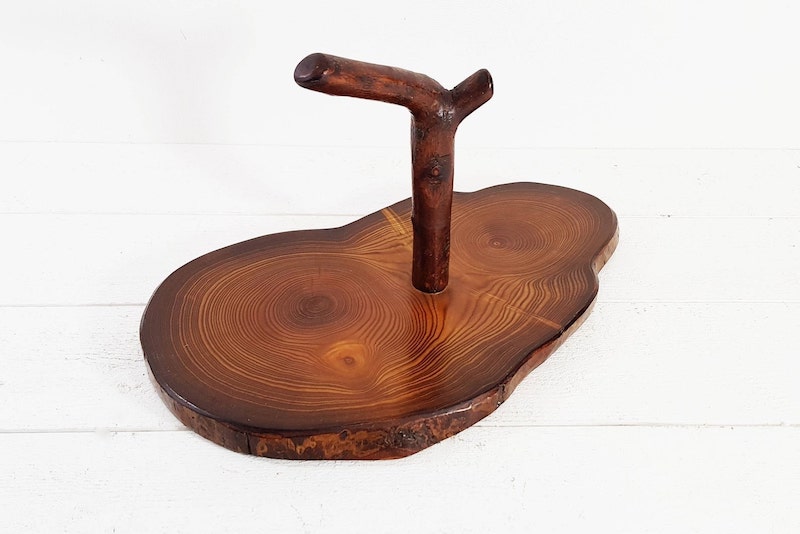 Not as easy to find as they once were – and all the more precious for it – these solid wood, handled cheeseboards were once a staple of French homes. Cheesemonger Patrick Ambrosio explains why everyone should have one…

Leave it to the French to invent the most adorable and charming cheeseboard. To the best of my knowledge it doesn’t even have a cutesy little name, so let’s just call it a handled cheeseboard.

Very often wooden or ceramic, it is a flat platter with either no lip or a very minimal one, featuring a handle protruding straight up from its center about six or so inches high. It is designed so that diners seated at the table can easily pass it to one another as they embark upon the cheese course.

French cheese protocol would have it that one would arrange the cheeses in a spoke pattern, from mildest to strongest. One can tuck a small cheese knife under each cheese so that flavors do not become mixed. It is also acceptable for the host to make a small cut from each cheese earlier in the kitchen before presenting the board, so as to provide some guidance for the guests on how to cut each cheese. When serving yourself, please take as much as you like of each cheese the first time around, as it is considered by some very bad form to go back for seconds − a practice, by the way, which I strongly disagree with!

Seemingly all the rage at one point, one would be hard pressed to find one currently in production. However if you should find yourself simply having to have one, fear not, as they can be found in great abundance on a host of selling boards dealing in used housewares, as well as on sites such as Etsy, which is where we found the handsome specimen pictured above.