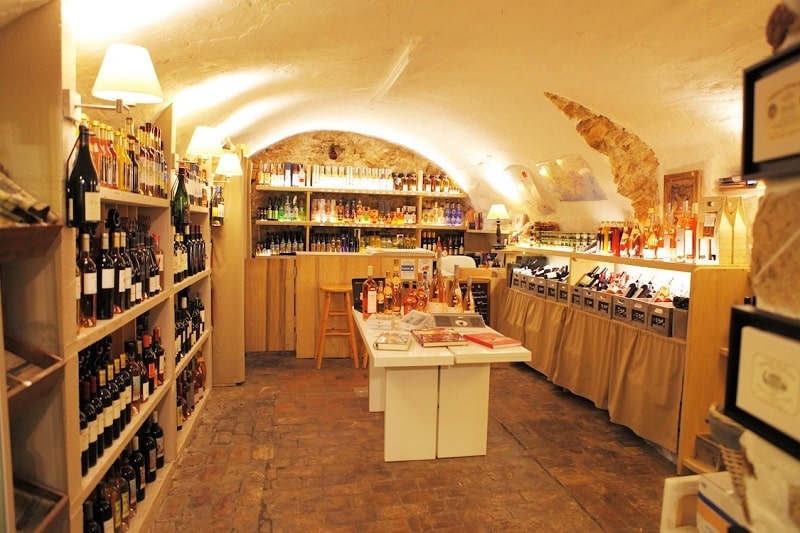 At the back of my neighbour’s citrus orchard, there is a tiny lane called Rue de l’Allée and off that lane is an even narrower passage that eventually leads into the heart of the oldest quarter of St Paul de Vence.

Tucked away in this characterful coin of the vieux village is the entrance to La Cave de St Paul, one of the cutest and most authentic caves à vin you could hope to encounter. You enter down the steps where Lydie Coullet, the proprietor, greets her local customers with a friendly ‘cou cou’ as they pop in for a bottle of rosé for the evening répas. Although without daylight, the lighting and atmosphere is inviting. An impressive, illuminated case displays a selection of Armagnacs and Cognacs. There’s plenty of regional wine for sale as well as some carefully selected Provençal favourites.

Lydie, who has a diploma from the University of Wine Suze-la-Rousse, has invited me to taste the most local wine of all, produced by Julien Bertaina of Domaine St Joseph, whose grapes are bio cultivated on the South West facing slopes of St Paul, right under the ramparts where the terroir allows for consistent temperatures and light breezes. We taste Effervescence, a smooth mouthful of juicy red made with 90% Mourvedre grapes. Hardly a budget bottle at 26 euros a bottle, but production volumes are tiny, and demand is strong. Provence reds are a coming thing, according to Lydie who has witnessed increasing refinement. “AOP Bandol et Bellet are sought after and can keep for ten years,” she added. According to her, “the trend is always quality over quantity” amongst the buyers. In that sense, she has quite a challenge on her hands, catering for locals seeking an affordable bottle for the table as well as wealthy foreigners who are interested in the finest wines.

Dégustation over, we descend into the lower level of the cave, where all the really good stuff is kept at perfect temperature. The room itself is a 14th century rainwater reservoir, later converted into a wine cave where locals have been bottling and tasting for the last hundred years, as the old photos testify. It’s only a few steps down but you enter another stratosphere where a who’s who of grands crus wine awaits. Haut-Brion, Margaux, Latour from Bordeaux, Meursault, Pouilly-Fuissé & Chablis Foret from Burgundy are just a few of the stellar wines amongst hundreds on display, not to mention some top-notch champagnes. For a photo I persuaded Lydie to cradle her ultimate collector’s item, a rare grand cru Romanée Conti. For sale? No – she’s going to keep it, sensible lady! But pretty much every other bottle is for sale at some eye-watering prices. When the Russians rent their summer villas on the heights above the Côte d’Azur, they seek out only the very best wines and spirits, and they can often find it here.

Back upstairs, I say au revoir and depart with a bottle of Morgon and a new Provence rosé to try, thanks to her recommendation. At a modest 20 euros for the two bottles I won’t be contributing much to her retirement fund, but Lydie is just as happy to serve and advise us ordinary budget folk as she is to track down and supply a prestige bottle for rich clientele. I love it! If you visit St Paul be sure to pop in for a look or book a dégustation in advance.