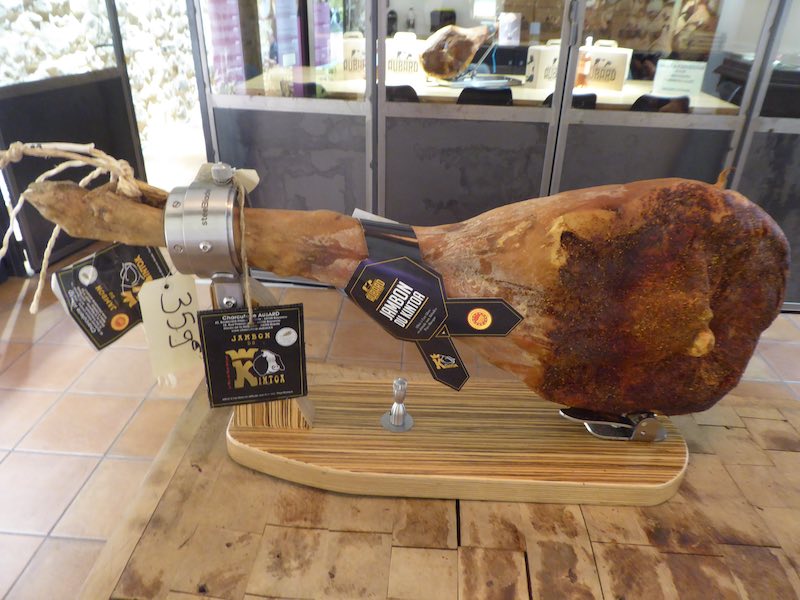 In the lush green foothills of the western Pyrenees, free-range pigs were once a common sight on the small farms that dot the valleys.  As far back as the 13th century, local people took their herds of pigs to graze the rich forests and mountain pastures of the kingdom of Navarre.  The ‘pie noir’ Basque pig was renowned for its exceptional charcuterie, but during the first half of the 20th century, the number of traditional Basque pigs steadily dwindled, faced with a relentless drive towards higher yields and modern methods of farming.

By the early 1980s, the Basque pig was on the brink of extinction, but in 1988, farmer Pierre Oteiza discovered this rare black and white breed at the International Agriculture Salon in Paris and launched a campaign to save it.  Supported by other breeders, he was gradually able to build up numbers, from just 25 animals in 1989 to 7000 in 2017.    And in 2010, the name Kintoa was given to cured hams and fresh meats obtained from the Basque pig in this south-west corner of France.

Basque pigs are free-range, living on acorns, beechnuts, chestnuts and natural cereals, and visitors can discover their story at Pierre Oteiza’s farm in the Vallée des Aldudes, close to the Spanish border (www.pierreoteiza.com).   Meet the pigs in the maternity pens close to the entrance; follow the 2Km discovery trail; and enjoy a taste of Basque Country charcuterie from the restaurant or shop.

Ham from Les Aldudes Valley is treated with salt from the Bassin de l’Adour and cured in a natural drying shed for 10-14 months, whilst AOC Kintoa ham is cured for 16-18 months to produce a dark red, marbled meat with a strong fruity taste and firm texture.  Today, AOC Kintoa ham is enjoyed by discerning diners across French Basque Country and beyond, and 32 years after Pierre Oteiza first came across those showcase pigs in Paris, he owns eight shops across French Basque Country and two more in Paris.  Oteiza products are also stocked by butchers and fine food shops from the Mediterranean coast to the Loire Valley.

But charcuterie and pork from these mountain valleys aren’t the only pork products to come from the area.   Bayonne ham is world-famous, named after the city that lies at the confluence of the Adour and the Nive rivers.  The meat must be produced from one of eight clearly defined breeds of pig from an area bordering the Adour basin, and every stage in the process is closely regulated, from feeding the pigs to curing the ham.  The finishing touches are also local – a paste of peppers from Espelette and salt from Saliés-de-Béarn that is rubbed into the rind of the maturing hams.

Discover the full story in the heart of historic Bayonne with a tour of Pierre Ibaialde’s salting and drying rooms (www.pierre-ibaialde.com) and visit the Ham Museum adjacent to Basque charcuterie specialists Maison Aubard (www.charcuterie-aubard.fr).   Available in whole legs or vacuum-packed slices, it’s the perfect edible souvenir that is guaranteed to travel well to your table.