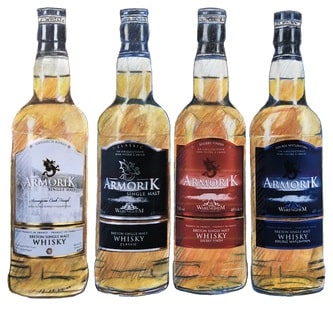 Known the world over for their fines wines, Cognacs and Armagnacs, we don’t tend to associate the French with whisky. So when Peter Cullingford was offered the chance to try a single malt distilled in Brittany, naturally he jumped at the chance…

It’s 22 years since Gilles Leizour set about creating France’s first single malt whisky, Armorik, but the Warenghem distillery where it is made, in Lannion, Brittany, has a long and illustrious past stretching back more than a century.

In 1900, Leon Warenghem founded the distillery and created his first product, the Elixir d’Armorique, a distillate of 35 plants which went on to win awards at various international exhibitions. Since then, the distillery has created a small range of unusual fruit and plant-based liqueurs, honey liqueurs, apple brandy, beers and whiskies.

In 1967, Leon’s grandson Paul-Henry and his business partner, Yves Leizour, moved the operation from the town centre to the outskirts of Lannion to be closer to the Rest Avel natural spring.

It was Yves’ son, Gilles, who carried on the distillery’s innovative spirit by creating a blended whisky in 1987 before producing the single malt in 1998. To this day, Armorik remains the most renowned double distilled whisky in France.

Continuing to keep it in the family, today Warenghem is overseen by Gilles’ son-in-law, David Roussier. Innovation remains at the heart of the business, with the recent release of the first single malt whisky finished in Armagnac casks (from the oldest Armagnac house, Dartigalongue), which is currently only available on the US market.

Armorik is made from 100% French malted barley, which grows in granitic soil less than six miles from the sea, so the air is extremely iodised. Humidity levels are pretty similar to those of the Scottish Highlands, and the weather is renowned for being rainy and windy too! The double distillation takes place in traditional copper stills.

So what does a French malt whisky taste like…?

The result of a unique ageing method, using a majority of refill bourbon casks made of American white oak and some refill sherry butts made of Spanish oak.

Mostly aged in refill bourbon casks and then finished in refill sherry butts for about eight months.

Aged in Breton oak from the forest of Armorik for about five years and then Oloroso Xeres sherry casks for about two years.

You can view more of the Armorik range and buy them at Heavenly Spirits.