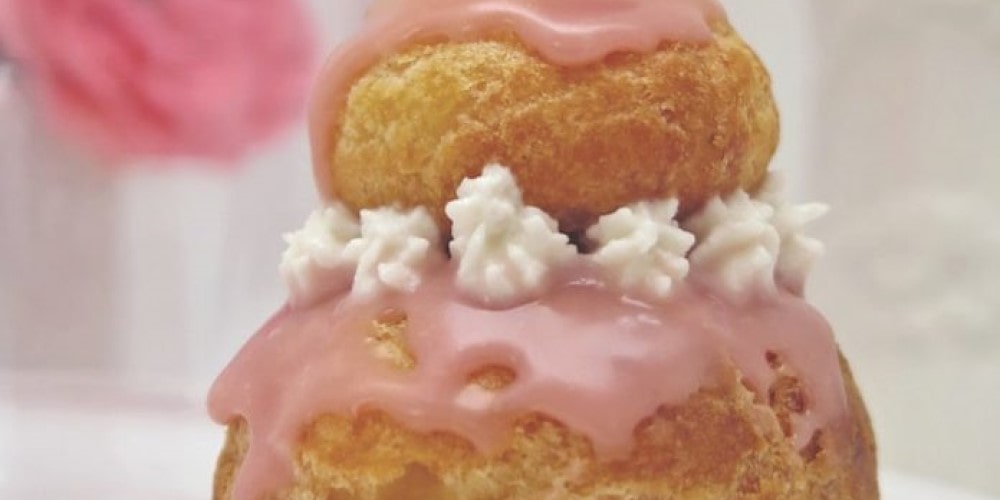 For the choux dough

For the rose pastry cream

For the lychee cream

2Prepare the choux dough following the instructions on the opposite page, then pipe out eight large choux puffs (about 5cm / 2” diameter) using a 12-14mm (½”) plain tip on parchment paper or a silicone mat on a baking tray. Bake for 25 minutes. On another lined baking tray, pipe out eight small choux puffs (about 2cm / ¾” diameter) and bake for 15 minutes. Once baked, remove from the oven and cool them on a wire rack.

3For the rose pastry cream, put the milk in a saucepan, add the rosewater and gradually bring to the boil over a low-medium heat. Meanwhile, in a mixing bowl, hand-whisk the yolks with the sugar until pale then whisk in the cornflour until pale, smooth and creamy. As soon as the milk starts to boil, pour half of it onto the yolk mix, whisk again and transfer back to the saucepan. Whisk continuously over a medium hear until thickened. Take it off the heat as soon as you have the first couple of thick bubbles. Once thickened, place cling film directly on top of the pastry cream and leave to cool. Chill in the fridge for an hour.

4Make the lychee cream: whisk the cream, then add the syrup and gradually add the chilled mascarpone until the cream is stiff. Transfer to a piping bag with a small star or flower nozzle to decorate later and chill until needed.

5Using a sharp knife, pierce a hole in the bottom of the choux puffs and pipe in the rose cream.

6To glaze, soak the gelatine in cold water for 10 minutes. Heat the cream, water and colouring in a saucepan until boiling, then take off the heat. Squeeze the excess water from the gelatine, and add it to the hot cream. Mix briskly with a hand whisk until melted. Add the white chocolate and mix until melted. Add a few drops of rosewater. Set aside to cool for 15-20 minutes, then dip in the rounded tops of the choux buns.

7Stick the small choux bun on top of the bigger one and crown it with a raspberry. Pipe out the mascarpone cream as a collar between the head and the body to ensure it stays straight.

8Leave to chill in the fridge and eat fresh on the same day. Serve with Darjeeling tea.

Win a Bottle of XO 200 Calvados from Père Magloire Worth...