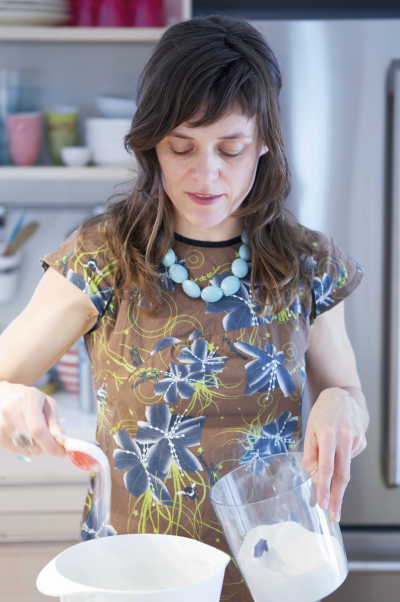 My ideal meal… Has the right balance of cooked and raw. A typical lunch at the house would be leftover rice with sunny-side-up eggs and spinach. For most people that would be enough, but then I’d grate a beet or make a carrot salad. I don’t like to just eat things that are cooked because it doesn’t feel fresh enough.

I’ve always been obsessed with… Food. When my [Irish] husband met my family, he said: “All you guys talk about is food. You schedule your day around meals”. My paternal grandparents were farmers so I spent time at the farm and I spent all my summers picking beans; we made jam. My life has always revolved around food.

My life changed when… I realised I was intolerant to gluten 12 years ago. So I educated myself, learned about different flours. It was hard. At the time there weren’t so many gluten-free things on the market. My first book was actually gluten-free, but I didn’t advertise it as such. For me it wasn’t a special diet book. It was a book about the enjoyment of food, beautiful, tasty food that happened to be gluten-free. I remember doing a talk about the book and this man said: “Oh, it’s not for me. I’ll give it to my mum.” As if, because it was gluten-free, it was weird food. But in the 12 plus years I’ve been gluten-free things have changed a lot – even in France. Now everybody talks about gluten-free. I don’t miss it so much. Except sometimes when I see beautiful bread at the bakery…

The cardinal rule of cooking is… Using quality seasonal ingredients. In the US, you can find any fruit or vegetable any time of year; they come from Mexico or California and they don’t have any flavour. Back in the day, it was instinctual, people ate what they had. But I understand it’s not a reality for everybody; if countries don’t grow something, they have to get it from somewhere. It’s about having common sense and being a bit more in sync with the seasons.

When I first moved to the US in 1994… I was a TA and I lived in this house with 10 people from all over the world. They would come down at 8am to the smell of garlic in the kitchen and I would be cooking ratatouille. They would say: “What is that?”. I told them: “I have to cook now before class because when I come back I won’t have time”. That’s what my mum used to do at home and in fact I remember thinking: “Oh my God, this is crazy, I’m turning into my mum”. But the smell of food cooking in the morning was very normal for me.

I’m still not used to… Americans’ approach to food – and dinner parties. They say: “Come at 6pm and it will finish at 9pm”. They give you a finish time! In France, if you did that, they would say: “What? We need to be done at 9pm?!”. When I moved many years ago, that was a shock for me. Not to be critical, but when we get invited for dinner I feel like sometimes people want to get it over with. In France, people love to linger around the table and whenever you have French friends coming over, you know you’ll be there the whole afternoon; you don’t make plans for the rest of the day. In the US, people get shy about inviting people to their house and when they do they always have a BBQ. There’s much less food preparation. The idea of pleasing with a meal is much stronger in French culture. I live in the US, you do what people do, but it’s still very weird.

I’m not so keen on… Brain or tongue. I ate some when I was a kid and that’s probably why I was a vegetarian for nine years when I came to the US. I prefer the lightness of greens and I love fish. But when I do have it, I prefer darker meat. I love the darker parts of the chicken, lamb and duck – but only a little bit of it. I don’t eat meat every day.

I would struggle to stomach… Cricket flour. I’ve been reading about the way they’re trying to provide food for the whole planet and a lot of people are trying to introduce cricket flour. I’m always curious about food. And it’s important to think about the big picture. But crickets… Psychologically, it’s challenging.